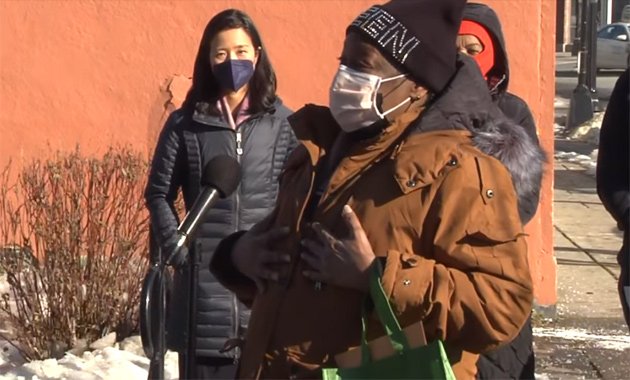 Mattapan resident Peggy James is thrilled with the free 28.

Mayor Wu today announced a deal with the MBTA to end fares on the 23, 28 and 29 bus lines for two years, starting March 1.

The city will use roughly $8 million in federal Covid-19 relief funds to make up the fares the T says it would otherwise lose by ending fares on the lines. The 28 is already free for riders under a pilot that began last year.

"We know public transit is a public good and it should be funded that way," Wu said at a morning press conference.

Among those extolling the expansion: Peggy James, a Mattapan resident who regularly uses the 28 for shopping, laundry and daily life. Not only does it save her money, she said, it reduces one of the frictions of daily life that can quickly escalate: All the jostling and irritation that can come from people lining up to get on the bus, especially when some people are feeding coins into the fare box. "Everybody gets on, they're calm, there's no hassle," she said.

Jascha Franklin-Hodge, Boston's chief of streets, said that among the benefits of ending fares: A 20% reduction in boarding times, which by itself can help improve service. He said this effect will likely be magnified on the 29 line, which will use the dedicated Columbus Avenue bus lanes.

Wu said that the free fares will tie into the "transformational economic corridor" the city is planning for Blue Hill Avenue, which will include the creation of trolley-like dedicated lanes down the center of the road.

MBTA General Manager Steve Poftak said this is an exciting time for bus riders. He praised the city for committing to pay for the lost fares on the three routes and pointed to the T's plans to replace or upgrade its bus yards, in particular the Arborway one. He allowed that "bus yards" sounds "mundane, it sounds boring ," but it's critical to the next generation of T bus service: Battery-powered, longer buses that will provide expanded, cleaner service.

In response to a reporter's question, Wu said she remains committed to moving to an entire T system without fares.

She said she has been talking to other nearby communities looking to establish their own fare-free pilots.

A no fare bus sounds fine

But what does it have to do with Covid?
When those funds run out its a good bet Mayor Wu is going to look for the funds elsewhere. The Fed is not going to fund it forever .

The city is already looking at ways to continue to fund free service once the pilot runs out, assuming the pilot shows there is value to such service - and is working with state and federal officials on ideas.

Bus riders in general were hit harder by Covid

Yes, just a guess, but based on who I see on just about any bus I have ever taken in Boston, they are the "essential workers" who work lower wage jobs. This program is great, I hope the next governor does it for the entire state. It can be implemented quickly. And it makes life easier for the drivers, too.

That's why it's called a "pilot"

The idea is to take the two years to show the value of the program, which will hopefully provide justification for reallocating money indefinitely...say from the ridiculously expensive and unnecessary new payment system...or .0001% of the roads budget, or a vacancy tax, etc, etc etc

I doubt The MBTA will fund it.

Every city and town will be lining up for no fare routes if that happens. But you never know.

Wu has never heard of

There’s no such thing as a free ride.

Please point to where she ever said there is

The city is spending $8 million on the pilot.

The riders pay taxes. Drivers on most roads and highways pay taxes too but no tolls on most roads. And electric vehicles pay no gas taxes which pay for half of highway and road maintenance and construction, the other half is taxes. Storrow, memorial drive, the cape cod bridges that are about to be rebuilt for billions? All free to use and few are complaining about those socialist bridges and roads.

How about free parking

The Governor should issue a mandate waiving all parking fees in MBTA lots. This would free up the roads and alleviate traffic congestion and would help to return tourism to Boston.

Why do people need to park if they're not driving?

Try it sometime during the average commute. There is plenty of "traffic congestion" leading up to/away from MBTA lots and garages. All you're doing is moving the congestion.

If you have a car, it has to

If you have a car, it has to be parked somewhere if you're not driving.

It's called "Park and Ride"

Perhaps the don't do that in your car dependent part of the state, but in the Boston area, the idea is to get people to only drive part of the trip, then hop the T the rest of the way. The Quincy Adams Red Line station has about 2,000 parking spaces and not much more around it. If that shut down, that would probably lead to 2,000 more cars trying to get up the Southeast Expressway in the morning than down again in the afternoon.

Worst of both worlds

If you get rid of fares systemwide, then the billion dollar capital cost and the millions of dollars of operating cost associated with collecting fares could be spent on things like buying and operating trains and buses.

On the other hand, eliminating fares on some but not all routes reduces revenue but does nothing to reduce costs and administrative bloat.

This analysis only makes sense from a limited MBTA perspective

You’re completely ignoring how much this helps neighborhoods of Boston where people are least able to afford the T. This makes it way easier and cheaper for poor people to get to the doctor or grocery store. Who cares if it makes things a bit trickier for the MBTA? The MBTA is a public agency dedicated to the public good, not it’s own optimal administration.

Free fares systemwide would probably be a better approach but that would be a massive change of operations, requiring state legislation to update the relevant law. This limited program just requires some negotiation and shifting money around. I don’t think your complaint is even slightly valid. Why would anyone think “thousands of people in Roxbury and Mattapan can’t easily afford to get around town” is a preferable state of affairs to “the MBTA is imperceptibly slower and more inefficient”?

Clearly my argument wouldn’t apply if Wu’s proposal would somehow bankrupt the MBTA or paralyze it with dysfunction. This does not seem to be the case here. Your comment is like complaining about the Affordable Care Act solely on the grounds that it gives HHS more paperwork.

But there's no revenue lost here for the MBTA

The MBTA is still getting revenue, it's just being paid for by the city of Boston rather than individual riders. I agree it'd be better to remove fares systemwide and reduce costs, but it's not reducing the money going to the MBTA and if it can be shown to improve traffic flow etc may even wind up saving money for the city as well.

Imagine how much new service

Imagine how much new service $8 million could provide. Maybe a few years of overnight buses, or more frequent service on the most crowded routes, or new service to big shopping or employment destinations that are currently only reachable by car.

This is offering more

This is offering more frequent service. They aren’t wasting time waiting for everyone to put coins into the machine before the bus can move again. No payment equals faster busses.