Lawyers working for tips in suit over shoddy robotic pipettes 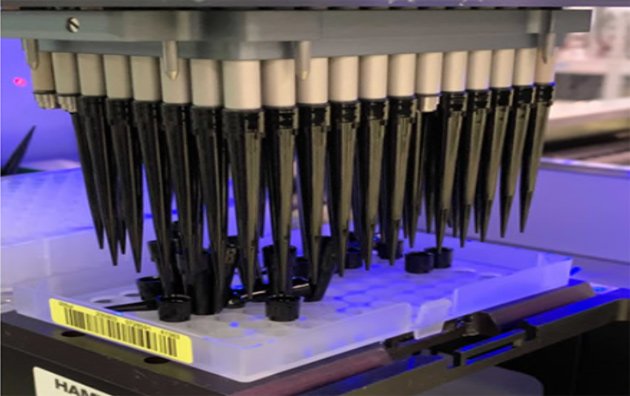 The tray would be empty if the pipette tips of the previous batch met specs, Ginkgo charges.

A South Boston life-sciences company that relies on robotic systems to squirt small amounts of things into tiny containers is suing a company that sold it $3.3 million worth of pipette tips it says kept making its robots stop working.

Ginkgo Bioworks, headquartered on Drydock Avenue in the Raymond Flynn Marine Park, uses robot pipetting systems made by a company named Hamilton - which pump liquids through tips that are then auto-disposed so that the next batch of samples aren't contaminated. In 2020, Ginkgo purchased thousands of cases of supposedly "Hamilton-compatible tips" from Thomas Scientific, a supplier in New Jersey, for use in "high-volume workflows" to detect the presence of Covid-19 in liquid samples.

Turns out many of the tips, manufactured in China, were not, in fact, Hamilton-compatible, Ginkgo charges in a suit it filed against Thomas yesterday in Suffolk Superior Court in Boston. Some of the tips were slightly narrower and slightly longer than real Hamilton tips, which meant the robots couldn't properly mount them in place - or which meant the robots had problems disposing of them property, which led to tips piling up and jamming up the robots as it tried to dispose of tips from later sampling. Other tips were bent. In some cases, the tip platforms were missing tips, Ginkgo charges.

Ginkgo says it agreed to buy the tips only after testing a sample batch Thomas sent that worked fine.

But Ginkgo says the production tips it got had problems from the start. During a high-speed test of its new Covid-19 testing system on March 3, 2021, Ginkgo says, seven of its robots literally crashed, causing problems that, if left unchecked could have led to "large motor stall currents that may damage a robot’s control and motion circuitry."

Ginkgo alleges that Thomas refused to take back all the thousands of boxes of tips Ginkgo says it's now paying to store offsite and said it would only reimburse Ginkgo for individual tips that could be shown to be defective. But finding defective tips among the thousands of cases of tips, Ginkgo says, would prove enormously time consuming and expensive - even aside from the cost of hiring a consultant initially to try to determine the extent of the problem.

Ginkgo says it wants Thomas to pay it for the $3.3 million costs of the tips, the cost of storing them and damages and attorney's fees.

In the meantime, Ginkgo says it's gone back to using tips manufactured by Hamilton.

Can't China do better? Can't U. S. do better? Everything they manufacture for cheap U. S. consumers is cheaply made.

The fact that Thomas Scientific is hesitating to accept a return of partly faulty products means I won't buy from them.

Gingko is completely at fault

Who buys $3.3M in plastic pipette tips without testing them thoroughly to make sure that they will work? That's something like 20 million pieces. Gingko states that they tested them for accuracy and did not notice any problems. But they did not test them in their high-speed system until months later. And then they noticed that they had a problem. Nobody in analytical testing, especially development folks, assumes that a part will work without thorough testing. Only then do you order large volumes of that part.

Typo of Ginkgo as "Gingko"

but I make that mistake about half the time myself. (Part of the problem is that the official name is itself a misspelling...)

This is a common issue when you source a product from a place far away known for its competition to produce something cheaper. Even though the world is smaller with electronic communication, producing a product far away has its issues. Quality control is the biggest issue, especially with a precision instrument like this.

Practically every mass-produced bicycle is made in China with varying results. Sub-standard product can involve many long trips to try to resolve production issues burning lots of money and time.

Outsourcing has been rather common since the 1990's

Outsourcing has been rather common since the 1990's.

Why the MBTA's plan for Widett Circle is pointless, unless the point is to waste a lot of money
Just doesn't make sense: Red Line stopped by a fence
Two-alarm fire on P Street in South Boston injures one firefighter
A Red Line train began to croak, from the top it started to smoke
Construction debris goes up in flames six stories up at old South Boston Edison plant
As snow falls, state announces new snowplow names