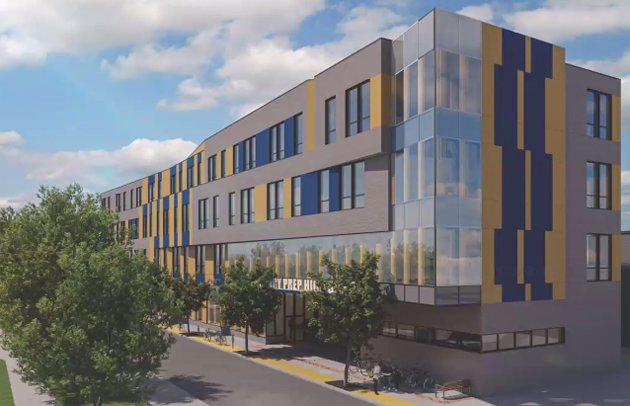 The Zoning Board of Appeal today approved Roxbury Prep's plans for a four-story, 800-student high school at 71 Proctor St., across from the troubled Clifford Park - which the school pledged to help clean up.

The approval comes just six weeks after the BPDA also approved the project. Roxbury Prep developed its Proctor Street proposal after the BPDA sat on its earlier proposal for Belgrade Avenue on the Roslindale/West Roxbury line for more than three years in the face of anger by many nearby residents, who said they were concerned about traffic issues and not the fact that Roxbury Prep students are primarily not White.

The new high school will replace a former construction yard, warehouse buildings and a single-family home that has sat unoccupied for decades and will provide a new home from students who currently attend classes in rented space in Cleary Square in Hyde Park and Nubian Square in Roxbury.

The new school would have 46 parking spaces and 50 bicycle spaces for its 90 to 95 teachers and other staffers.

Robert Baldwin, development consultant for the school, said most students will likely take public transportation to and from the school - near a Fairmount Line station and buses on Massachusetts Avenue, and a relatively short walk to the Nubian Square bus terminal. He said a new shuttle bus sponsored by the Newmarket Square Business Improvement District could also ferry students to and from the Andrew Square Red Line station.

Baldwin said that Roxbury Prep will be making a contribution to the Boston Parks and Recreation Department to help with maintenance of Clifford Park across Proctor Street from the school.

"We can provide a lot of good synergies to look after the park and as an asset for school," he said, adding the school is continuing to talk with Parks and Rec on how to improve safety in the park, which nearby resident say quickly fills up with needles and other debris despite frequent clean-up sweeps by parks workers.

He continued that Roxbury Prep is looking for no special privileges for using the park, which serves both nearby residences and the Mason School.

Peter Calabrese, an attorney for the owner of a warehouse at 75 Proctor St., next to the site, however, said the school's drop-off area on Proctor Street would cover the street in front of one of his client's entrances, which he said would cause problems with its potential to mix parents, students and 18-wheelers. He said the school building should be scaled back to allow for more on-site parking.

Calabrese asked for the board to defer a vote for three months because of both that issue and to allow for a study of the chemical contaminants on the sight that might be disrupted by construction.

However, the board voted then voted 6-0 to approve the proposal.

Boston does not care about children.

Lets recap the plight for this school.

Not on Belgrade, because BPDA sat on its hands.

Now on a possibly toxic site.

Surrounded by addiction, incarceration, food inequity and the services therein.

Left with the responsibility of cleaning up the park?!?

Yet as Erin Murphy says "You will be a wonderful neighbor..." TO CHILDREN!

And I wish them the greatest success.

It's a sketchy location. I don't know if I'd lock my bike up outside for the day there. But Boston is running out of nothing faster than sketchy locations. It will be different in a decade. And it's quite central (this would have been a great location for Massachusetts to build a magnet school).

I know a lot of parents are going to be very happy to send their kids to this school.

Police say guy had a gun loaded with 33 bullets when they came looking for him in Roxbury
Orange Line passengers need to wear raincoats these days
Five-building residential and life-sciences complex with a museum could rise on long vacant parcel on Tremont Street across from police headquarters
Police seek help finding gunman who held up Roxbury market
Coffee rager at Roxbury McDonald's takes out frustration on glass pastry case, police say
Police say woman was driving through Roxbury with a loaded gun and drugs, although they say it was her failure to turn her lights on that first grabbed their attention