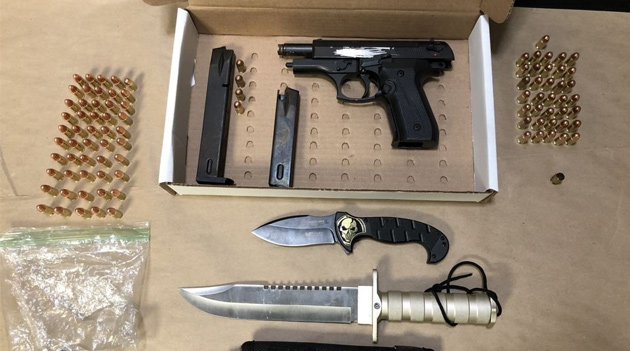 Police say that when officers spotted Tramonte Queen, 22, in a car at the intersection of New England Avenue with Woodrow Avenue and Norfolk Street around 1:40 p.m., they went to stop him - which they did after what police say was a brief chase.

Mr. Queen was also in illegal possession of a semi-automatic handgun with an obliterated serial number and an extended magazine loaded with four .380 rounds of ammunition. Additionally, Mr. Queen was found to be in possession of a total of eighty-six loose rounds of ammunition, forty-nine live 9mm cartridges, thirty-seven live .380 cartridges, and one spent .380 cartridge casing. He also possessed a folding knife and a hunting knife.

Is walking around with 7 warrants normal?

Sounds like the warrants are useless.
Wouldn't they have been issued at different times by different courts?

He has different court dates with multiple charges and just doesn’t show up. Then he might commit more crimes but isn’t caught (slaps his wife but runs away before police show up)…..add them up and you have someone like this guy.

So he doesnt show up to one court

With a warrant from another only to be let go?
It just seems like a lot, how many does it take before they come and get you?

State Police have a fugitive/warrant team that would normally have a guy like this in their workload. I’m guessing he knew he had the warrants and was looking at time so was avoiding law enforcement at all costs.

Johnny Uhub shoplifts in West Roxbury on Jan 1 and he is arrested and the Judge gives him a trial date of April 1. In the mean time he gets arrested for beating up his GF in Brockton on Jan. 15 and gets arraigned and given a future court date of May 1. Now on Feb 1, Jonny shoplifts in Brockton (police decide not to arrest) and is summonsed there and given a court date of June 1. Now on Feb 15 Jonny shoplifts in Newton and gets summonsed there for a court date on July 1. Here comes March 1st where Jonny does an armed robbery in Brockton but gets away. Brockton detectives ID him and ask the court for a warrant for that robbery and the court issues it. Now it’s March 15 and Jonny beats up his GF in Stoughton, but runs away because he knows police have a warrant for him for the robbery. So the Stoughton police get a warrant for the domestic A&B (these are called straight warrants). Now Jonny goes to Worcester and lays low until August (missing all of his court dates)How many warrants does he have then? My quick math tells me he has six warrants from 4 different courts, two straight warrants and 4 default warrants (for missing the court dates)

So the next question is

After this guy defaulting 7 times, does he get bail (or personal recognizance) for now his 8 charges?

I don't think that people should be incarcerated pretrial if it can be avoided, but if this guy is skipping court dates, there may be a reason to keep him locked up.

Having a history of defaulting in court dates….

Is a primary factor on bail issuance.

This Queen was ready to slay.

This Queen was ready to slay.

86 rounds is plenty bad enough, but you doubled the amount of live ammunition he had because of questionable punctuation in the BPD report.

That first comma should be a colon.

The folding knife is legal in Boston if...

...you can demonstrate you were carrying it somewhere for job purposes or a "lawful recreational or culinary activity which customarily involves the carrying or use of any type of knife".

Which is a complicated way of saying "the police don't decide you look sus".

He had a warrant…

Interesting statute for “carrying a dangerous weapon” means he isn’t allowed to have any knives with him.

Can you expand on that?

I didn't see anything in that section about interactions with other weapons or with warrants -- what section are you thinking of?

He was charged with Carrying a Dangerous Weapon

This statue is the basic law which says you can't have a specific list of "banned" weapons like dirk knives, zoobows, stilettos, etc. These are called "per se" weapons.

It also bans someone from possessing any weapon if they are arrested on a warrant (firearms are not included). This tells us that he is being charged with this crime because he had these knives (do not have to be the illegal "per se" ones listed above) in his possession when he was arrested with the warrants.

So I'm assuming the knives that are in the photo are those which are the reason he was charged for above offense.

but I will admit that that section is *extremely* difficult to read and so I may have misunderstood it.

That said, I think it hinges on whether that knife is in fact a "weapon", which it would not seem to be from that MGL section.

However, I can't tell from the picture whether it has a sharpened spine near the tip, which would indeed make it illegal under MA law, warrant or no. And the skull emblem certainly makes it seem less like a utility knife and more like a weapon, interpreting the Boston municipal law. Either of those could make the warrant thing irrelevant.

per se (those specifically outlined in the section) and non per se (baseball bat, hunting knife, etc). This case the knives were non per se (not mentioned in section a of the statute with the nun chucks and daggers).

Interesting case law on this. If the knife is folded, it may not be considered a "weapon" for charging purposes. But a kitchen knife not folded or sheathed may be. So you are right, if the knife was folded (and probably somewhere that couldn't be used quickly against officers) it may not qualify.

From one of the bigger cases involving this:

This case turns on "whether the evidence permitted the fact finder to conclude that the defendant used or handled the knife in a manner that made it a dangerous weapon." [Note 10] Commonwealth v. Turner, supra at 829. The defendant argues that, because he never removed the knife from his bag to use or even hold it, it was not dangerous.We disagree.

The defendant is correct that merely carrying a kitchen knife, without more, would not be prohibited by the statute. See id. at 830. However, this case is not like Turner where, "[w]hatever the knife's potential for harm at other times and in other circumstances, the defendant did not use it in a manner that was capable of causing serious harm or even the apprehension of serious harm." Id. at 829. In Turner, the defendant's knife was folded in his back pocket, invisible to the arresting officers, and the defendant consented to a patfrisk because he had nothing "on him." Id. at 826. By contrast, here, the defendant had positioned a large kitchen knife such that its handle was protruding from the top of his backpack, both making it visible and providing the defendant easy access to an unsheathed knife even without removing the backpack he was wearing. [Note 11]

The context of each arrest is important as well. In Turner, the defendant was simply stopped on the street after the driver of the vehicle he was riding in committed a traffic violation, ibid.; here, the defendant was meeting at an arranged location with a police officer whom he knew to be conducting an investigation of him. Moreover, the defendant had asked Detective Halloran to meet him alone and then asked her to walk with him to a relatively secluded area, at night, from the busy location at which they had agreed to meet. [Note 12] The manner in which the defendant carried the knife and the circumstances surrounding his carrying the knife

The purpose of the law is so that people with warrants don't arm themselves to use against the people coming to arrest them.

So whiteout is the new serial

So whiteout is the new serial number obliteration tool for possibly stolen weapons? What a sloppy damn job.