Teen shot in stomach, leg on Geneva Avenue in Dorchester 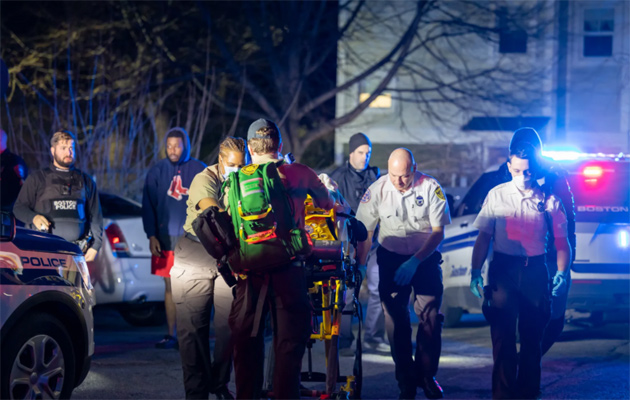 Victim being rushed to ambulance. Photo by Live Boston.

Boston Police report a man was shot on Fayston Street around 6:40 p.m. on Wednesday. He was taken to the hospital with injuries not considered life threatening. Read more.

Around 10 p.m. on Columbia Road opposite from Stanwood Street. Both victims got themselves to the hospital with what police said were non-life-threatening injuries. One car was also hit.

Person shot in the leg in Dorchester

Two people were shot at Harvard and Gleason in July.

Around 6 p.m. yesterday outside 78 Fairmount Ave.. No details yet on his or her condition.

Around 1:20 a.m. in the area of Fidelis Way and Washington Street. With the help of a couple other people, the victim got himself to St. Elizabeth's.

Police were looking for three men seen running from the scene: All white, heavyset and around 20, two not wearing shirts, one with long hair wearing an orange shirt.

That makes at least six shootings across Boston overnight.

A man shot at Dudley and Humphreys streets in Uphams Corner shortly before 9 p.m. was driven to Boston Medical Center and then left there. The man's injuries were serious enough to have the homicide unit called in.

Around 10:30 p.m., possibly in the head on Danube Street, although the homicide unit was not requested, which is only done when injuries appear life threatening.

Conspiracy to NOT to mention gun control when reporting on shooting of Rep. Gifford

Is it more important to fill the air waves with filler about Gifford's trip to Rome or to ask how and why a man suffering from mental illness could get a gun and kill five people, including a judge? The journalists are a bunch of wimps and their editors' collective decision to not repeat the statements of gun control groups cast doubts on the editors objectivity and ability to see beyond the babble.

A 41-year-old South Boston man was found with multiple gunshot wounds and near death last night on the beach by Day Boulevard and M Street, the Suffolk County District Attorney's office reports. District C-6 reports the man was shot in the face.

The man is in critical condition at Boston Medical Center this morning, the DA's office says, adding State Police homicide detectives are investigating the shooting because the beach is state property.

Accused University of Alabama Shooter Got Her Ph.D. at Harvard

Numerous sources (mostly feeding off reports at al.com) identify the woman suspected in today's mass shooting at the University of Alabama-Huntsville as Amy Bishop, who rece

Incredibly, after I filed a Motion to video with the Court, and provided said Motion to DA Dan Conley's underling Edmond Zabin -- and then proceeded to upload 35 YouTube videos (now with 14,000 views) Dan Conley gave me the stiff arm and a finger toward the face when I moved to ask him a question at conclusion of the Dan Talbot murder trial. He doesn't like the fact that I exposed a situation where it appears that Officer Billy Soto planted a spent .40 cal casing on top of a Gatorade bottle in the trash. Those of us who shoot guns, even occasionally can see that, scroll down and look at pictures, click on them, they are trial exhibits that I shot in hi-res 1600 x 1200

Boston Police last night arrested Jermeil Robinson, 17, of Jamaica Plain, for the Saturday shooting at the Academy Homes project that sent three boys to the hospital with gunshot wounds.

He's to be arraigned this morning in Roxbury District Court on charges of assault by means of a firearm, assault and battery by means of a dangerous weapon, assault with intent to murder, unlawful possession of a firearm and ammunition, discharge of a firearm within 500 ft. of a dwelling and carrying a loaded firearm on a public way.

Witnesses and relatives told the Globe the attacker just walked up to the boys, 11, 11 and 12, and started shooting.

Seriously- what is it with MA cops killing motorists?

The local police department, state police, and DA have set a world speed record for wagon-circling; we don't even know why the officer tried to pull over the vehicle. Based on previous incidents, it's doubtful anyone will get more than a slapped wrist.

Teen charged with shooting teen to death in Dorchester

Rashard Monroe, 17, will be arraigned today in Dorchester District Court on manslaughter charges in connection with the death of Kendell Floyd, also 17, yesterday.

Floyd was rushed to Boston Medical Center, where he was pronounced dead.

This is Boston's 11th killing of the year, the ninth in Dorchester.