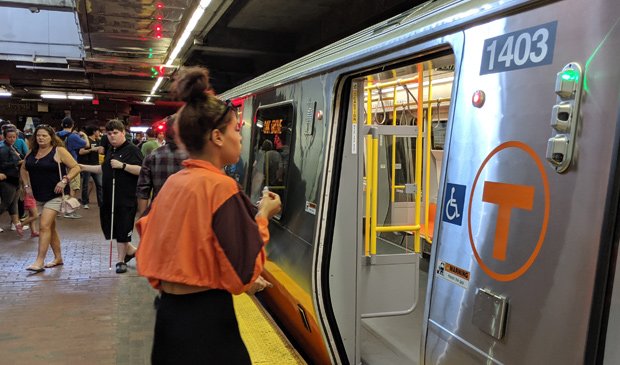 Shortly after 11 a.m., the first of the new Orange Line trains pulled out of Wellington, heading south. Around 11:40, it pulled into Forest Hills, disgorging its first load of railfans, regular T riders, T workers and a lots of reporters.

If it didn't quite glide silent as a cloud, neither did it belch one of those loud sighs Forest Hills users have grown accustomed to over the years. Most of the squealing at Forest Hills came from two kids who were really, really excited to see and get on the new train. One kid who rode from points north to Forest Hills wore an Orange Line shirt for the occasion: The train had six cars, the first of a set of 152 the T hopes to take delivery of through 2022, to replace the current fleet of 120 wheezing, rusty old rec rooms on wheels that have been plowing the Orange Line tracks since the early 1980s, back when the Orange Line still ran as an el through Roxbury and Jamaica Plain.

State officials say the second new Orange Line train should go into service this fall and that, eventually, the extra cars, when coupled with track and signal improvements, will mean more frequent, more reliable service on the Orange Line. In the meantime, though, riders will mostly have to continue to put up with the current trains: A new train didn't mean a faster ride from Forest Hills, at least not yet - the thing still had to crawl up to Green and then Stony Brook. And the view out the doors - much wider than on the old trains - at some stations remains just the same, as Saul Blumenthal, who rode the train from Wellington and then back, noticed: At least on the car the UHub Action Mobile News Team jumped on, there seemed to be more reporters than actual people (maybe it was because we were in the car with the open bar): An old outbound train and the new inbound train were in Stony Brook at the same time: One of the features of the new cars are screens that tell you which station you're approaching and what connecting buses or commuter lines you can get there: The trains also have automated announcements alerting riders to the next stop, voiced by Frank Oglesby, the guy who gave us the "Attention Orange Line riders, the next train to Forest Hills is now approaching" station announcements, brought back from retirement for his smooth vocal stylings. On the minus side, that might eventually mean no more Angry Screaming Orange Line Driver shouting at passengers who hold doors or refuse to move away from the yellow line.

The cars have new signage, as well, although the doors at the ends of cars are still marked with "No passing through" signs, and you've got to wonder how long those will remain unedited: The seats showed the T learned from their mistake on the Blue Line: Like Blue Line cars, the new Orange Line ones have seats that are more like benches. But unlike on the Blue Line, the shiny plastic seats have a nubbly surface, to hug rider butts so they don't slide into other rider butts on curves or during sudden stops.

A look down our car, featuring a smiling TV reporter, her cameraman and a guy who looks like he's trying to place her: Yes, the new cars had a faint new-car smell. More important, and we can't stress this enough: THE AIR CONDITIONING WORKS!

The first ever passenger service of the new cars began, of course, with a short ceremony. Gov. Baker was there, but no, don't worry, he dign't get jostled or his hair mussed on the Orange Line: He spoke, posed for photos, then departed for a ride somewhere in his SUV.

Above ground, head wedged up some tailpipe as usual?

Who is the mayor of Medford?

Because he (or she) would be just as appropriate a mayor to be there as the mayor of my city would be.

The T is a state agency, not a city agency. You've been here long enough to know this.

She was at Wellington - the only Medford stop.

Now. Where was Car Guy Mahhhhty when he's got over a dozen stops in his city?

Let me put it this way

Mayor Burke's speech was as long as Mayor Walsh's was.

That said, how can you account for the presence (or lack thereof) of either of them, or the Mayor of Malden, for that matter?

You get owned on a daily basis. How do you handle it?

I don't feel that I've been burned, since Swirly basically noted that she knows who the mayor of her city is, but since it was the king of being owned who replied (I'd like to think Swirly would have made a more substantive reply) I had to go with what I was given.

of course you dont

but you were. oh well, you can't win em all. unless you think you can. in which case, well done man. that was a sick burn.

Now that, my friend

Was a sick burn.

Well done. I doff my hat to you.

We are all that kid in the

We are all that kid in the Orange Line shirt today.

I like the voice of the guy on the NY subway, the jaunty "Stand clear of the closing doors."

And how can a smooth digital tone truly convey all that is; STEP AWAY FROM THE DOORS - THE DOORS ARE CLOSING !!

But Did He Record

"This train will be standing by for a schedule adjustment." or "There's another train directly behind this one."

Oh, and the automated platform announcements are more like: "Attention passengers: The next ____ Line train to _____ is now approaching."

"another train directly behind this one"? :-)

They just never tell you how far directly behind. Could be two minutes or two hours!

Anyone remember the super

Anyone remember the super nice orange line driver from a few years back? "It takes team work to make the dream work!" Maybe he's still around, but I miss hearing him on my morning commute.

There's a woman who drive the blue line in the mornings who not only wishes everyone a good morning, but when she's announcing Aquarium, she always adds "my favorite place." She also tells people which way out is the closest to the aquarium.

..."mayayayay favorite place". And she does it the exact same way every time. That woman drives me crazy. Someone should tell her that the only people on the Blue Line at rush hour at 7:15 in the morning that are going to the Aquarium are people who work there.

for thinking of her passengers.

yeah it's repetitive, but whatever. imagine how many people, including families with kids need that little extra bit of advice when getting out at Aquarium.

when I lived in Western Mass, there was an express bus from Northampton into Amherst in the mornings, filled almost exclusively with grad students. One of the regular drivers was an older man who, without fail, when we got to the stop on campus said, very matter-of-factly "everybody have a good day", and it was like our collective grandpa was dropping us off at school. And I'm a sour, terrible person who hates most people but even I learned to like it.

In case you want to plan ahead and know when the new train is coming. The lead car number on the new Orange Line trains begin with 14XX (the ones numbered 12XX and 13XX are the old rustbuckets currently plying the line).

I also found this: https:/

I also found this: https://newtrains.today/
Dunno how accurate it is.

Is the new trainset in regular service or just a occasional run?

Have they announced when the next new trainset is going into service?

They took it out of service after 3 round trips

To look it over or something. Supposedly, it goes back into service tomorrow.

The next new train is supposed to start running next month.

I've defended the T when the trains have gone down because these trains were on the way. I want my new trains.

Why the heck isn't the next

Why the heck isn't the next one not going into service for another 5+ weeks, best case scenario? They have been sitting on this first train all year.

Look, all I care about is

Look, all I care about is that they are kept clean and that they don't stall.

Imagine...an orange line car with no "genetic deposits" anywhere....how long will that last?

will it run again today?

Maybe but a full service day, probably no.
and why if they had this set for a year is the next set still 4-6 weeks off?
at least the beat my snarky 2020 bet. even if it was just for show

I cannot wait for that.

That kid is wearing not just

That kid is wearing not just an orange shirt, but orange socks too! I love it.

Boston leaves Common social distancing up to you
Emerson to rent most of the W Hotel for student housing; says it will tell any students who show up with Covid-19 symptoms to go back home
Downtown roof fire does some damage
No more paper penis hats at Faneuil Hall Marketplace
Pret a Closer
Cheers owner sues insurers over refusal to cover coronavirus-related losses