Feds: The trolley that rear ended another trolley on the B Line was going 20 m.p.h. faster 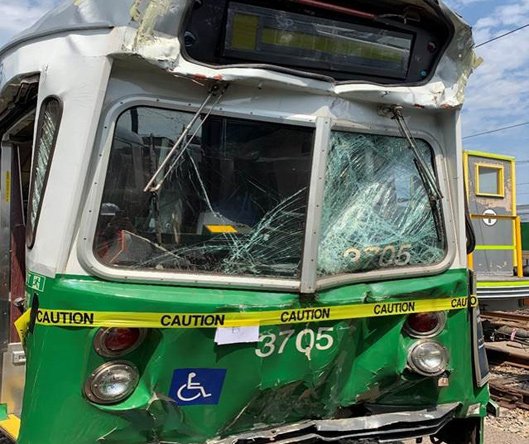 The rear of the hit trolley, the next day, after it had been taken to a T yard. Photo by NTSB.

The National Transportation Safety Board reported today that its initial findings from Friday's B Line crash showed that an outbound trolley traveling at 30 m.p.h. plowed into the back of a trolley going just 10 m.p.h. at Pleasant Street.

After the crash, MBTA General Manager Steve Poftak said the speed limit for trolleys there was 10 m.p.h.

The NTSB says it has recovered data from the "striking" trolley's event recorder, which tracked the trolleys speed, brake application, door positions, horn use and other information.

The board, which says a final report and conclusions could take up to two years, says the force of the collision injured 27 people on the two trains and derailed three of the four cars involved.

It did not speculate on the cause of the crash. A system designed to prevent one trolley from smashing into another - which the NTSB recommended after Green Line crashes in 2008 and 2009, is still years away.

In addition to NTSB investigators, the MBTA and the state Department of Public Utilities are also taking part in figuring out what happened. The Carmen's Union has been offered a role in the investigation as well, the NTSB says.

Why so long? Sad.

Why so long? Sad.

"transportation" is a broad term

The NTSB is the agency that investigates gas pipeline accidents, as well as the obvious aircraft, ships, and trains.

How long this investigation takes will depend partly on how many staff they can assign to this--and that may depend not just on how much they're already working on, but on how many accidents happen while they're investigating this one.

The board, which says a final

The board, which says a final report and conclusions could take up to two years

Why so long? Thoroughness

The NTSB generally does meticulous and thorough investigations that involve examining parts, expert reconstruction and modeling to determine how the damage pattern was likely caused, interviews with operators, passengers, and by-standers, among other things. All of this takes time. The goal is a thorough understanding of what happened and what caused it to happen, in order to make recommendations (in this case, likely ones that have been made before ). There are often multiple contributing factors.

ITT: People who have never read an NTSB finding report

People complaining here about the TaT have clearly never read anything published by the NTSB. As the user above me pointed out, these reports examine everything including the physics behind the impact forces. They will model every aspect of the crash and the reports often result in specific recommendations to the agencies involved.

They will also release the

They will also release the transcript of all the texts the driver sent, redacted only for personal details.

What criminal charges can be brought?

Against the driver for her negligence?Its not like she can be cited for traffic offenses.

At least until we know whether something else went wrong, like the brakes failed.

Can't we just hang them first

Can't we just hang them first and then figure out what happened?

That kind of judgment

That kind of judgment is reserved our resident troll, Kinopio, to make and only when it involves privately owned cars. Please know your role.

WCVB identified the driver as

WCVB identified the driver as a male. They have downloaded the speed data from the wrecked trolleys, so I suspect they already have a pretty good idea if the brakes were working or not. The fact that the driver of the second trolley was suspended would suggest they have already eliminated mechanical failure as a cause.

The fact that the driver of the second trolley was suspended would suggest they have already eliminated mechanical failure as a cause.

Have they been suspended? I thought they're just on administrative leave until further conclusion.

According to the article on the Boston Globe website, NTSB said there should be a preliminary report in just a few weeks.

The quote from the Globe story, for added context

“At this early stage of an investigation, NTSB does not state a cause but will provide factual information when available,” NTSB spokesperson Jennifer Gabris said in a statement on Monday. “Investigations involving injuries and other major investigations currently take between 12 and 24 months to complete. A preliminary report is expected to be published in a few weeks.”

The maximum deceleration for a green line train is 3.5 mph per second. The track for outbound trains is sloped up at 1.8% grade (40 ft rise over 0.4 mi from BU West to Babcock street). At 30 mph, it should only require about 4 seconds of braking over a distance of 14 yards to bring the train to a dead stop. If you reckon on a reaction time of 2.5 seconds, that goes up to 50 yards.

Since the other train is moving, this is an overestimate of the safe following distance, but it should give you an idea of how much margin there is.

The distance from the east side of Pleasant street to the west side of Agannis Way is more than 40 yards.

Since the NTSB has declared this to be a major investigation, it gets its own page on their website: https://www.ntsb.gov/investigations/Pages/RRD21FR013.aspx

...that is one out-of-service train.

I wonder if they'll bother to fix it.

It just sunk in on me that it

It just sunk in on me that it's one of the older ones that got hit (looking at the colors/windows/number), right? Damn- they wrecked a good one!

plowed into the back of a trolley going just 10 m.p.h.

It's always the slow drivers who cause problems!!!1!11

(that's sarcasm, in case anyone is confused.)

A system designed to prevent

A system designed to prevent one trolley from smashing into another ... is still years away.

Have they considered a temporary stopgap solution such as, say, watching where you're going?

Was there even any attempt by

Was there even any attempt by the 2nd driver to avoid the crash by swerving around the stopped trolley, as seems to have happened here? 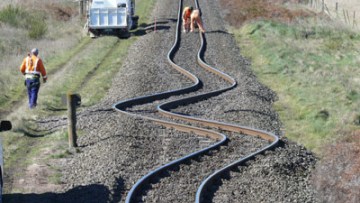 Was the trolley in front

Was the trolley in front wearing dark clothing? Listening to headphones?

My theory based on zero evidence

I could imagine the 2nd car rushing to make it through the lights at Pleasant St and then not having time to stop before rear-ending the first trolley. Again, just a theory.

That's faster than any train I've ridden on the B line.

One guess what a developer wants to turn the old Hotel Buckminster into
Fenway gyro place closes
Gang rode the Red and Green lines with a crowbar at rush hour, robbing and beating people, police say
Trolley driver acquitted in case involving him crashing into another trolley, injuring 24
Houses shook, car alarms went off, cats panicked and some people's ears began to ring: Not an alien invasion, just a pre-hockey jet flyover at Fenway
Feds to give MBTA $66 million for Symphony upgrade