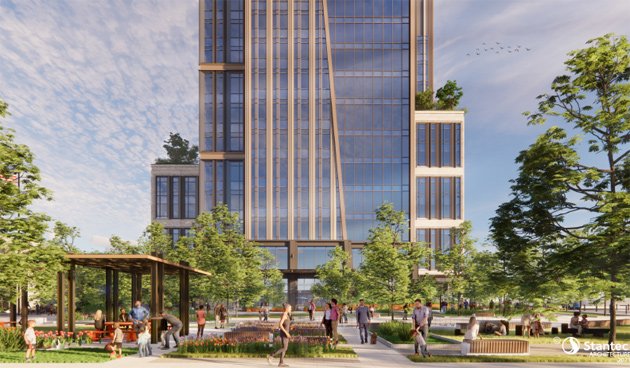 Core Investments today filed plans for a four-building complex along Dorchester Avenue at Alger Street that will include life-sciences labs, offices, retail space and 196 residential units - on a nine-acre site where the company originally planned to put a large Amazon warehouse that the BPDA rejected as not in keeping with the residential/office future it has planned for that stretch.

The proposed On the Dot would be adjacent to a similar, but larger project proposed by National Development.

Core Investment calls for buildings between 11 and 17 stories tall, with three buildings filled with biotech labs and offices, as well as ground-floor commercial space and one 13-story residential building - 1.74 million square feet of space in all. The plans call for 600 parking spaces in underground garages. Some 1.6 acres of what is now an old scrap and salvage yard will be turned into landscaped parkland.

Because the site sits in an area that could flood with sea-level rises, Core Investment says it would put the first floors of the buildings above anticipated new flood levels. Entrances to underground garages will be built to allow for temporary flood barriers, the company says, adding, however, it's really counting on the city to follow through with plans to build a flood wall between 3 and 6 feet high at the end of Fort Point Channel, which is where the sea would attempt to reclaim all the land that was once part of South Bay.

On the Dot filings and calendar. This is a gorgeous scene

This is a gorgeous scene that looks nothing like I've seen around Andrew Sq. Is the Interstate behind that building?

Something I learned long ago. Real estate developers develop real estate. Simple. That is how they generate cash flow, keep the lights on, and pay the bills.

Banks and investors should be acting as a check on developers but often do not. They need to book loans or place funds.

I get a bit worried when I see everyone heading in the same direction. It looks like every unbuilt project and development or failed proposal is suddenly "lab space".

I sure that Investors, banks, and BPDA are all doing their due diligence.

I have seen nothing indicating how much demand for this space actually exists and how much the market can absorb.

Is there anything about lab space buildings

that precludes other uses? If it can be easily converted to other offices or manufacturing or whatever, I don't see that this is a huge problem for anyone other than the developer.

They could be converted to

They could be converted to office space.

We won't need office space for a long while which is why they are being built as "lab space".

Probably not an easy conversion to housing which is what is needed.

Kendall Square is the leading

Kendall Square is the leading submarket for life science real estate in the US, probably the world. The vacancy rate is effectively 0%. Demand is overwhelming by any metric. Anything that can be developed near the red line would find little trouble feeding off this demand. Sure, Andrew isn’t Kendall, but there are more than just the Moderna and Pfizer’s of the world. A lot of the smaller players pay to be close to the big guys though.

It's incredibly hard to get lab space at any price without going to Watertown at best, or further out.

Another factor is the high competition for talent. It can be a lot harder to recruit and retain if you're not in an area people want to work.

A developer who's concerned about sea level rise while building a garage to attract 600 cars needs to look in the mirror.

Why do we keep approving these projects? Where is our city and state leadership?

Also, no shade thrown for the proposal to have space for 1224 bicycles?? Sounds like a robust multi-modal transit plan that incoporates on-site housing, walking, MBTA, bikes, and (yes) cars.

The MBTA doesn't work for

The MBTA doesn't work for many people. A trip from Dedham to Andrew Station is 1.5 hours+ according to mbta.com on a rare good day. By car, 30-45 minutes.

Also, investors will look at lease rates and if parking is needed for higher rates, you will get parking.

Then maybe the developer should build in Dedham where there's lots of space for parking instead of Andrew Sq.

Your argument is invalid. There are many office buildings that do not offer parking to tenants. And even more that offer a very **few** spaces (like 10) and its usually based on your square footage.

There are companies out there where there's no parking at all. If you want to park, you need to pay for it. (and pay thru the nose for it). It can be done, and there's a market out there for office space that is like this.

If the commute on the T, or paying for parking elsewhere doesn't work for you? Too bad. Time to find a job closer to your home. I know many people who switch jobs for this reason alone. (myself included). It isn't a harsh statement, it's just fact.

I agree with anon, we need to stop allowing these huge buildings with huge garages. You know if we stop doing this, we might get more transit riders, thus increasing fare revenue , and increasing public awareness on how the T sucks (and needs to be fixed). We have our say at the ballot box.

But no, we'll just continue to allow these massive garages to be built, adding more cars to the road, more greenhouses gasses because "its inconvenient to take the T". Everyone is for saving the environment until it inconveniences them directly, like leaving the car at home and taking the T to work.

Related but outside of the garage issue, this would get a no from me. Its too big & doesn't fit in with the rest of the buildings. I'm all for housing density, but this is like a sore thumb.

Also.. can we stop pretending we're going to win at sea waters rising? What good is a building with a flood wall in 30 years when the sea rise is perm? You gonna commute to work to that island with no power or telecommunications?

It was over 100 degrees in the artic circle last week, we need to stop pretending we're going to fight the sea and save our city from becoming Venice. And building high rise 'island' with 600 space car garages isn't helping matters very much.

It doesn't fit in

With what surrounds the site now, but it absolutely fits in with what BPDA plans for development in the area.

Also, pre-Covid, the Red Line was at or above capacity during peak travel hours. I'm less concerned about the potential contribution for GHG emissions related to the parking simply because I expect most vehicles using the facility to be electric in about 20 years. I would require ANY new parking facility in Boston to install EV charging at all available spaces from here on out.

I was hoping “bird enriched” in the photo caption….

…. meant accommodation for wildlife was part of the plan. It just looks like more glass surfaces for birds to fly into. It doesn’t even appear to include green roofs.

Once everyone realizes that we've built far too much lab space for the actual demand, how easy will it be to convert these buildings to other uses?

It's easier to go from lab space than to lab space in the building conversion game.

So much so.. when the converted, they took over an entire floor just to 'deal' with all the extra "utilities" for the lab space above and below it.

We also lost our roof top views as every foot of the roof was covered by the venting ducts and such.

Even old *labs* require a

Office Space is the same

Its more than just desks and cubes these days....

As someone who works in a lab

As someone who works in a lab in an old building, yuuuup. The HVAC alone can be a real nightmare.

We also lost our roof top views as every foot of the roof was covered by the venting ducts and such.

You do NOT look at the BWH roof, then.

Being built at Andrew square will be the end of the meth labs and the methadone mile because the real estate in the area is to valuable.

Those new labs will be cookin up sumthing.....

Just because there are railroad tracks/yards in between, along with 12 lanes of freeway and frontage roads. Maybe in 20 years if/when everything between Old Colony Ave and the Old Colony Line has become 20-story office/lab/residential.

There is recent community planning in this area that is supposed to guide new development. I know the other project in the area (further up Dot Ave) is in compliance with that planning. Is this one?

Putting all those gentry in there.

Court says man got a fair trial on charges he raped a coworker in a Seaport hotel, so he gets to remain behind bars
Man shot repeatedly on West 7th Street in South Boston
Man repeatedly hurls N-word at bouncer, spits in his mouth; bouncer breaks his mouth, police, employees say
Townie objects to somebody in Southie telling him to stop driving the wrong way down a one-way street, so he pulls out his loaded gun, police say
As big container ships go, it was bigger than most
Two bodies discovered during Mass and Cass cleanup