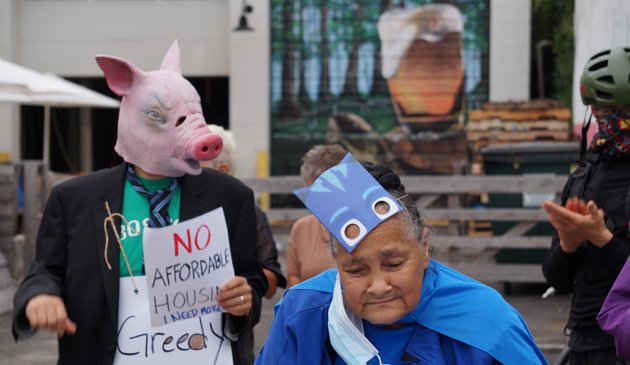 Protesters peacefully gathered outside Turtle Swamp Brewing on Washington Street in Jamaica Plain this morning to urge the brewery and its landlord, Monty Gold, to work with a local non-profit to get 39 apartments for seniors built next door, instead of suing to block it.

The rally, organized by City Life and the Massachusetts Senior Action Council, called on the brewery and the landlord to drop their suits over the Jamaica Plain Neighborhood Development Corp.'s five-story building at 3371 Washington St. Kathy Paul of the Senior Action Council said her members will be asking local packies to drop Turtle Swamp beer until it and Gold drop their suits.

Turtle Swamp and Gold filed separate suits in May to try to overturn the Zoning Board of Appeal's approval of the project, both arguing the building could put Turtle Swamp out of business in part by construction right next to the brewery's patio and by reducing parking along Washington Street, in particular for the large trucks that now park there to deliver supplies. They also argued there's nothing so unusual about the existing 3371 Washington St. site, which now houses an auto-body shop and El Embajador restaurant, that it deserved seven variances.

Under the proposal for the site, first-floor space would be reserved for El Embajador to move back into.

City Life community organizer Alex Ponte-Capellan told rally attendees that what neither Turtle Swamp nor Gold say is that JPNDC offered to work with Turtle Swamp to address its issues, up to offering it space in the Brewery complex on Amory Street and a shuttle bus to get customers from Washington Street to the new location if they could not figure out how to make construction work without interrupting Turtle Swamp's business.

Ponte-Capellan said that early on in the process for getting the JPNDC building approved, he spoke with Turtle Swamp owner John Lincecum and that they parted so amicably that Lincecum gave him some of the brewery's beer as a parting gift. This morning, he opened one of the cans - he said he didn't much like the beer and it had just been sitting at home - and dramatically poured it out: He then stomped the can, after which he picked it up for recycling. He then walked up to the main Turtle Swamp door to try to deliver petitions signed by 1,600 residents urging an end to the suit, but while brewery workers had opened their garage-like doors, the main door was locked, so he fitted the envelope into the door.

Protesters milling outside Turtle Swamp, chanting things such as "Monty Gold, you can't hide, we can see your greedy side:" We must fight to protect our

We must fight to protect our breweries!

There used to be a ton around Heath St. 100 years back and they've now been replaced by smaller ones. Nature is healing.

It’s insulting and disrespectful to pigs …

… to say Monty Gold is one.

They may be picketing the wrong people. The zoning bylaws make it illegal to build much needed senior housing. There is nothing about the lot's size, shape, or soil that would entitle them to the needed variances.

Most of the city would not

Most of the city would not fit into today's zoning laws.

When has zoning prevented development in Boston?

I understand and fully support Adam's need to generate revenue for the site by taking ads. But I must say, the new video ads -- which appear and reappear in the spot where the picture should accompany the article -- just don't fit in with the subject matter.

In this case, for example, we get the photo caption, "As greedy pig listens, Kathy Paul of Mass. Senior Action Council calls for lawsuit to be dropped," while the illustration above that caption shows a mother-to-be stretched out and sleeping on a "body pillow".

Is the peacefully resting mother the greedy pig, or is she Kathy Paul?

Those ads have an X to turn them off, but I'll see how to make them stop showing up altogether.

"offered to work with Turtle

"offered to work with Turtle Swamp to address its issues, up to offering it space in the Brewery complex on Amory Street and a shuttle bus to get customers from Washington Street to the new location"

Is that supposed to be a serious solution? We'll just take your business and move it to a new location of our choosing? And force customers to get in a shuttle to enter your business? That's rediculous.

I'll admit I haven't seen the show in like 8 years but I don't remember fighting gentrification as being a theme.

Sure appears to be a good chunk of anon users shill posting in support of Monty/Turtle Swamp here.

Also, no heroes in this story.