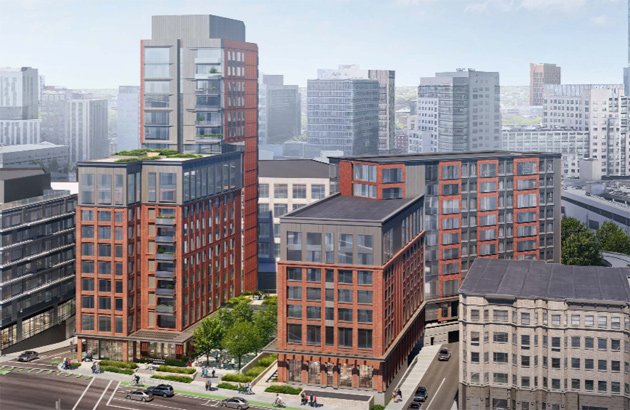 The Zoning Board of Appeal today approved plans by a London-based developer and Children's Hospital for four new buildings at 819 Beacon St. that will have one wing rising 17 stories and which will include 53 units that will provide short-term housing for families living more than 50 miles from Boston who have children getting care at the hospital.

The proposal for what is now a parking lot is part of a series of buildings planned by Scape, which entered the Boston market intending to build large numbers of private dorm rooms but which, in the face of strong opposition from residents and city officials, transformed into an apartment developer instead.

Some 59 of the residential units will be rented as affordable, with most of those rented to people making no more than 70% of the Boston-area median income.

The building will have a 200-space underground garage.

My little Fenway is all grown up {sniff}

200 Parking spots is 150 too many but not surprising they want to keep the parking giving the cash that lot makes. It's one of the few open air parking lots left in what use to be a sea of them. After this is complete the next development will be tearing down the decaying industrial buildings on Brookline Ave.

I wish they'd continue the bike path next to the above ground Fenway stop but at least Beacon St is now moderately bike friendly.

I sometimes use that shady walkway behind that lot as a shortcut to Burlington Ave. I wonder if it will stick around. Interesting history seeing how it used to be the loading dock for freight rail.

Lived across the street

Spent a year across from there, next to Fathers Too. Every time I go by there, I'm shocked at the changes to what was once a huge parking lot. Making places for Children's families to stay is a great idea. Build it!

James Harold, owner of the Rat, dies, 79
Thank goodness for the 39 bus
Somebody at Fenway was a real asshole today
We imagine it sounded something like: SKEEERONNNCH
Developers propose 111 apartments in two buildings next to orthodox cathedral on Park Drive
At least somebody's getting hits at Fenway these days