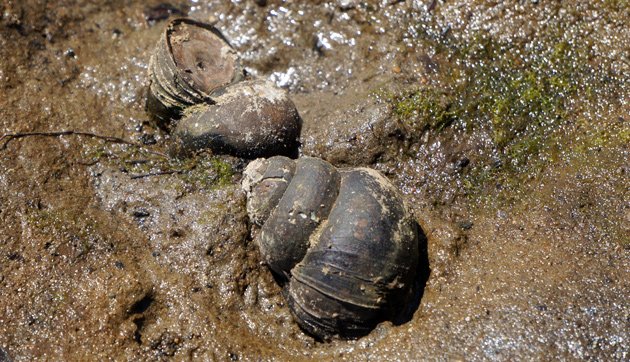 Walk out onto what used to be the middle of the Charles River at Millennium Park these days and you'll see not just sand and mud and land plants growing everywhere, but the shells of what our local wildlife photographer Mary Ellen says are Chinese mystery snails.

The snails, native to eastern Asia, first showed up in Massachusetts in 1914, either because they hitched a ride with goldfish imported to control mosquitoes or because they were released by Chinese fish markets dumping water from their fish into local waterways (they were, in fact, first introduced in North America as a food in Chinese markets in San Francisco a couple decades earlier)..

They got their name because it was initially a mystery where the adults came from - rather than releasing eggs to hatch in the water, females "give birth to young, fully developed snails that suddenly and 'mysteriously' appear." They're also sometimes called trapdoor snails, because they have the ability to withdraw completely into their shells and then close up the opening with a "trap door."

They love ponds and slow-moving shallow river water covering silt and mud, where they can hoover up algae and diatoms - so the slow-moving Charles River where Boston, Dedham and Needham are ideal for them.

In Asia, they can carry parasites that can infect people, but no such transmission has ever been seen here. They do, however, carry other illnesses that can affect fresh-water mussels, the shells of which are now also easily seen in the mud and silt along the Charles at Millennium Park.

As noted above, they are edible. In fact, in 2012, in Eating Aliens, Jackson Landers described a taste test comparing them to French snails. He reported they were inferior to the French snails in French cuisine, but said that they compared favorably to clam strips, and that "after being tenderized, fried, and served with tartar sauce, they're quite good."

The snails were there in the 1890s, so maybe the fish were shipped from there?

There are two problems with this elaboration of the original theory.

1. San Francisco is closer than China, but is it close enough? A coast-to-coast train trip takes about three days. Were people really transporting fresh fish from the west coast for sale in Boston, home of one of the US's most productive fisheries, in 1914? If so, why?

2. If they were, were the fish markets engaged in the practice particularly likely to be Chinese?

The mere fact that the snails originally came from China would have no bearing on which fish markets they would show up in after they had gone native. It might, however, influence folkloric theories about how they got here.

Addendum: This piqued my curiosity, so I looked around, and found that the answer to question #1 is yes. The Atlantic halibut fishery collapsed in the late 19th century, and by the early 20th Pacific halibut were being transported, on ice, via railroad, to eastern markets. Halibut are big fish, which might make this more practical. Question #2, however, still stands.

Could they be called non mammalian ….

…. marsupials? Are they mollusks? I hope so because Molluskian Marsupials in Mornay Sauce is something I want to add to my next dinner party menu.
Chinese Mystery Snails just sounds too stereotype promoting for my guests to swallow.
Even if they do it for environmental reasons.

I've eaten all SORTS of creatures, but a bottom-feeding Charles River denizen that's a poor second to a fried clam holds no interest. Now if they were farmed in clean water...sure I'd give it a go.

Here's your word of the day:

Ovoviviparous. It means there are eggs but they remain inside the female until they hatch.

There are a lot of ways invasive snails could show up here. The " Chinese wastewater" theory is oddly specific.

I'm willing to believe that it was wastewater that resulted in this infestation.

I'm not willing to believe the story as told.

What I would believe is that ships took on bilge water in a foreign port and then dumped that water in or near the Charles before the damn was built.

"Why don't you tell me 'bout

"Why don't you tell me 'bout the mystery snails?

I wanna know about the mystery snails.

I can't do it anymore and I'm not satisfied!"

I bet plenty of large birds and raccoons are satisfied with the easy pickin's.

I don't know about eating

I don't know about eating these but anyone with a lake house knows that it's not recommended to touch one with a bare hand.

“They excrete nasty, dirty, polluting excrement. They stink something terrible and it’s a difficult odor to remove.”

If they are edible

then they were probably intentionally brought to Massachusetts as food -- but then likely accidentally released. (Could have been intentional, of course!) There's no need to invoke a theory of them hitching a ride on other seafood all the way cross-country by accident, especially if people know that the adults travel well.

I always wondered where the giant goldfish in the Charles came from. I thought people were dumping their pets in it.

In a past life, as an ink-stained wretch at Framingham's finest daily paper, some of us were talking about the MIT goldfish theory and our editor came out, overheard us, said he didn't buy it. So I set out to prove him wrong. Found the state's one expert on Charles River goldfish, at Fisheries and Wildlife, interviewed him and did a story on Charles River goldfish and, yes, that's how at least some of them got into the Basin - probably the same way koi have shown up in Jamaica Pond.

Then, a year later, years of frustration he had with his boss finally reached the boiling point and he came to work one day with a gun, chased him around the parking lot and shot him dead. But that's another story ...

The editor or the expert? This matters, because a homicidal newspaper editor is kind of a dog-bites-man story. A homicidal goldfish expert, on the other hand...

The editor is doing fine, last I heard.

How long does an animal have to be in the ecosystem without wrecking it to stop being "invasive" and just be fauna?

Like, I get that we can keep a history of how things travel and human transport is somehow different than brought by birds, the wind, flood, migration, etc. But, at what point is something just...here now.

I'm not an invasion biologist, but I'll do my best.

The only distinction about human transport is just that it happens *so much more* than "natural invasion". Really fast, really frequent.

As for when it starts being "native" again, I think it tends to be pretty long timescales, like thousands of years. It can take a few years for the local ecosystem to start adapting, but it might take decades or centuries for something to be fully entangled in the local web of life, complete with parasites, diseases, predation, the works.

Invasives don't even have to wreck an ecosystem that they're brought to. Sometimes they can even bring benefit, or be net-neutral. But usually "wow this is spreading quickly" means "this is displacing something else". It would be an unusual situation for an exotic species to spread quickly without taking over the niche of something else, or disrupting *something*.

Calling something related to its origin? How racist can you be?

Sky prism over the Grove in West Roxbury
Former head of homeless-shelter concern gets year in jail for embezzling nearly $1.5 million
Heron in the mist
West Roxbury's one brutalist building being torn down
DA moves to seize money found after man who was already facing trial as a drug dealer was arrested on new drug charges in West Roxbury
Didn't claim your new buildable lot off Millennium Park? Too late