You could soon be able to tee off right on West Broadway, well, in a basement next to it 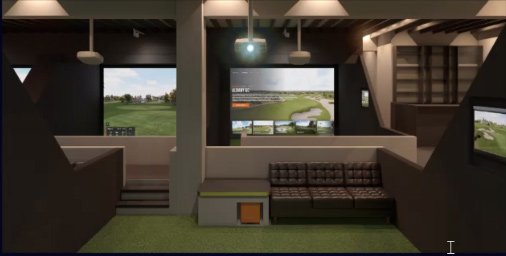 The Zoning Board of Appeals today approved a proposal for a golf "course" at which people could sign up for tee times to play 18 holes of golf on computerized simulations, then retire to a "19th Hole" lounge to talk over their rounds - all year long and even at night. And should they somehow injure themselves, there'll be a a CVS right upstairs.

The board unanimously approved plans by Southie native Danny Picard to upgrade what is now a vacant 5,000-square-foot basement in the CVS building at West Broadway and F street by installing six separate rooms to be reserved by golfers, who would swing real clubs and balls at a computerized screen that would track the motion of their balls after their swings.

Most of the space would be taken up by these rooms. "You need room to swing a golf club," Picard's attorney, Nick Zozula, said.

"It's an opportunity for a unique hospitality concept" in a stretch of Broadway that is now currently the home of numerous bars, Zozula, said, adding Picard hopes to stay open until midnight.

Zozula said that, just like real golf courses, potential duffers and more expert players will have to sign up for a tee time, with most rounds costing around $65.

Access to the 19th Hole will be limited to people who have signed up for tee times, he said.

One thing the new facility won't have: Golf carts.

The plans also call for a podcast studio. That did not come up at all during the hearing, but Picard has done broadcasting.

Hi Adam, there's a quotation mark on the end of the final URL that 404's the page.

Are they offering complimentary parking space savers for customers.

I’m sure there will be some kinks to work out but that sounds like a great idea.

Anyone else remember indoor golf at North Station?

In the 1970s. There was a screen that had sensors, and slide projectors with pictures of a course. You hit the ball into the screen, there'd be this tremendous clattering and after a few seconds a shot would show up with a light indicating where you were on the fairway.

I'm sure the tech will be a lot more sophisticated today.

on Route 1 in Lynnfield at Salem Street.

Outdoor sports in the basement

With a beer fridge.

Indoor dog park. You put a VR helmet on your doggo, then put them on a treadmill and off they go, running around like it was public park.