An afternoon snack at Jamaica Pond 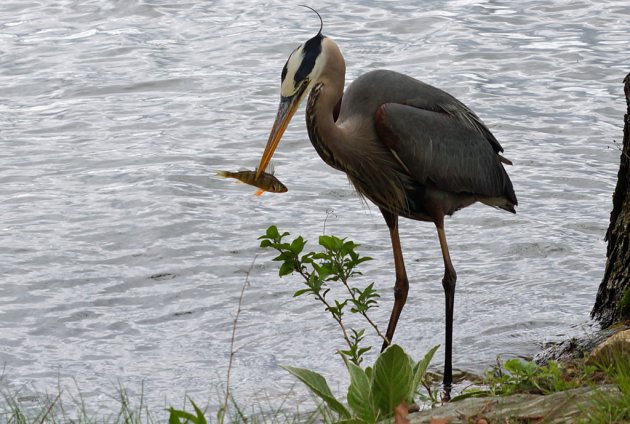 The heron stood mostly still at the water's edge along the Pinebank side of Jamaica Pond today, only its neck swiveling as it scanned the water. Then, suddenly, it went into a crouch, like a cat about to pounce, took a couple of steps to the left and speared the water, coming up with a quickly devoured canape.

Later, after it had moved closer to the Perkins Street side, something set it off and it took off into the air: The heron was hardly the only bird along, or on, the water. Two of four goslings took some time to check out something on the ground, as their parents stood guard nearby, hissing at any people or dogs that dared come near. Meanwhile, over at the usual turtle haunt, two turtles looked like they were having a face off, although more likely they just wound up positioned like that and were too busy lazing in the rare sun to pay much attention to each other: I've watched a lot of herons

I've watched a lot of herons watch a lot of water, and that is a fantastic picture.

I got really lucky. I was standing there, watching it standing there watching the water and just taking lots of photos of it, when it suddenly went into hunting mode.

All hail the majestic heron! I wish they would acquire a taste for geese and help to rid us of that scourge. (Yes, the goslings are adorable, but unfortunately they grow up to be a threat to public health and a huge nuisance)

The Canada goose was at one time was thought to be extinct thanks to the wonders of DDT. Then some wildlife biologist found a flock in remote Minnesota from which our 60,000 Massachusetts geese are the descendants. Which means that there are about a thousand humans for every goose. Which flock needs to be thinned ? Geese will not come ashore if they can not see the water. But that would make you smarter than a duck.

That thin stringy feather on the back of the head means that is likely a parent heron who's bringing home supper for the kids. As they get close to fledging, the babies will actually spear dad or mom pretty aggressively to get that lovely fish.

Cornell Ornithology lab had cameras in and above a GBH nest in Sapsucker Woods (Ithaca), and by the time the chicks fledged, the parents had really taken a beating. There are YouTube videos of them.

Adam goes for a walk around the pond and casually snaps a few wildlife photos which are just as good, if not better, than any professional could produce. If Adam weren’t running Universal Hub, he could easily dominate the world of photography.

As for geese, maybe it’s just me but I have noticed fewer geese and ducks in the area as compared with 10 years ago. Are coyotes eating them?