Masshole tries to barrel past stopped E trolley; sends woman getting off train to the hospital 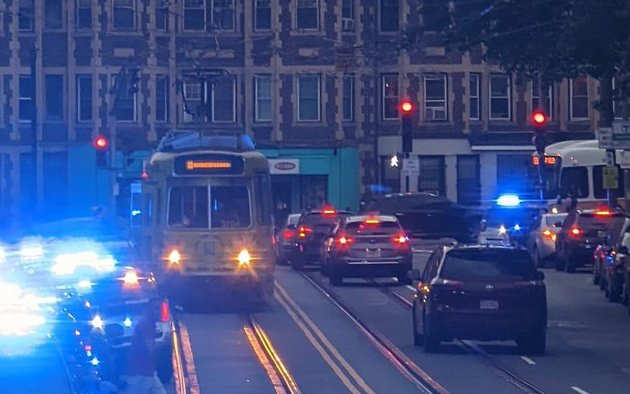 After police arrived at the scene. Photo by Justin Mc.

A woman getting off a trolley stopped on South Huntington Avenue, at the turn from Huntington, didn't make it to the sidewalk yesterday evening, because a motorist who disregarded the fact the trolley was stopped and had its door open, ran into her.

Police say she suffered a minor leg injury in the incident shortly after 7 p.m., although serious enough that StreetsBlog reports she was taken to a nearby hospital for care.

Unclear at this point whether the driver stayed for police or took off.

These Green Line trains here DO NOT make it obvious that the doors will open and passengers will be disboarding into an active traffic lane. The trolley's stop sign is FAR is less obvious than that of a school bus... it barely extends out and doesn't light up. Yes, the driver should have been more careful, but poor design is also at fault here.

The Breda Type 8 trains are a huge improvement over the older Kinki-Sharyo Type 7. Both feature bright red alert lights over every point of egress, but the Type 8 switched to significantly brighter LEDs and doubled the number of rear lights to boot.

Would throwing on a school bus-style Stop Sign help? Maybe. But how many school buses do you know that have to stop in the middle of a busy road and not on the shoulder? The road configuration designed for a time when there were a fraction of the single occupancy vehicles on the road and they moved at a third of the speed.

The problem here is road design and drivers. Traffic calming is needed here as well as dedicated platforms for passengers to disembark. But we see how fanatical drivers can be to cede any public land away from their exclusive use when we look anywhere that improved shared access has been implemented.

We can throw as many lights and signs as we want, but the fact remains that drivers will drive according to design and conditions more than any sign or light will dictate.

But how many school buses do

But how many school buses do you know that have to stop in the middle of a busy road and not on the shoulder?

Plenty.
I see it more on rural or suburban roads, but some city streets and intersections, too. If there's a pattern of illegal passing of school buses and enforcement is not sufficient, some school bus drivers will yaw their buses across the road at an angle and block ALL traffic so their charges can board and deboard safely.
This is not an uniquely or exclusively Massachusetts thing

Buses also have to discharge passengers

who will be crossing the road, not staying on one side.

You need to assume that if a train is approaching a marked stop, you need to slow down, pay attention, and not drive as if there are no rules an nobody but you matters.

It is actually pretty simple.

The Stops Are All Marked

This is obvious to me. When I’m driving or biking and I stop for the stopped trolleys as the law requires, people behind me blare their horns and sometimes try to aggressively pass.

They should make Huntington car-free. And until then, it definitely needs much more obvious signage, striping, crosswalks, etc. at the stops.

I’ve seen far too many near misses and unfortunately hits of bikes on pedestrians.

Do tell. Actual hits only, please - if we start counting "near misses" of cars on pedestrians, we won't even be able to see your numbers as a blip compared to what cars do.

Frankly, I know myself and a lot of other bikers avoid if it possible since crossing the trolley tracks sucks a lot (would be better if you didn't have to deal with cars, of course). So I'd love to see some numbers that show that this is a huge problem for people e.g. getting off the Green Line, as in this case where someone wasn't just passed too closely but actually got sent to the hospital!

of bikes striking and killing pedestrians. Why, I heard of one such occurrence just 10 years ago!

The markings for these stops are horrible. They have these tiny little faded orange signs, and then some slightly larger yellow signs, but most of them are placed beyond where the trolley stops and people get on and off. The signs themselves have long strings of text, one of which quotes chapter and verse of MGL saying what law you are violating. There should be a sign ahead of the stop which says "DO NOT PASS STOPPED TROLLEY" and maybe has flashing yellow lights when there is a trolley there. Not hard!

Plus, road markings. There are no road markings showing, say, a crosswalk where the front door of the trolley would open. That seems like something which could be installed in days if not hours. Back in the day, when the trolleys roamed much of Boston, there were places, like here in Watertown, which had this sort of crosswalk. We should do the same thing today. Also back in the day, safety boarding islands, like this one on Mass Ave in Cambridge. We should install these on Huntington Ave for the trolley. Even if they have to be narrower than what exists elsewhere in the system, a six-foot cross-section is wide enough for accessibility (and provides accessibility, which does not exist today) and also much, much safer.

It's hard to blame the drivers too much in this case because there are so few places with trolleys anymore. In the 1950s, everyone knew that if you were driving and a trolley stopped, you did too. This was one of the complains about the trolleys: they didn't pull out of the way of traffic like buses did. With many fewer trolleys and poor signage, people who aren't familiar with that section of street may not know to stop. It doesn't excuse the behavior, but it helps to explain it.

Oh, and, the T/DPU should rescind whatever policy requires the trolleys to go 10 mph on Huntington (and across every other crossing, even if they have a green light, unless we are going to make all cars slow to 10 mph too, which would be fine I guess). The 10 mph limit means that drivers are often over-eager to pass the trolley, especially if there is a double-parked car ahead, because they want to save a minute. Letting the trolleys operate at normal roadway speeds would do a lot to help (and make them faster for transit passengers, too).

Let's make the inside lane

Let's make the inside lane transit only (for trolleys AND buses) and build some island boarding platforms!

The Heath Street Branch is within its own right of way until Brigham Circle.

After that it heads south to Heath Street within the regular street layout. It is the only part of the trolley system that is not in its own ROW, save for the connector line between Cleveland Circle and the BC line along Chestnut Hill Avenue and that is not in regular service.

Parking is really not allowed where the dedicated right of way is now. It is where they right of way is not. The area south of Brigham Circle, especially starting at Mission Park has a lot of subsidized housing. A lot of working class people live along that stretch of the line. The demographics are changing along South Huntington with the additions of the new apartments facing the J-Way, but the people there are a pretty good demographic in a politician's pocket.

Do you want to be the one to take away their space? Good luck with that.

The section of South

The section of South Huntington between Brigham Circle and the Riverway has got to be one of the most bananas stretches of any T service in Boston. Street traffic, parking along both sides, Green Line without real platforms, and buses. If you wanted to design a transit choke point, I'm not sure you could do that much better than South Huntington. It's amazing more people aren't injured.

Either that stretch needs to be for transit (Green Line and bus) or for cars, but not both simultaneously.

In other Mission Hill news

Meet the people who would replace Nika Elugardo in the House
Mildred Hailey teen charged with Mission Hill shooting in escalating gang war
A blue bird of happiness
Planting an arboretum on Mission Hill
Business in the front, condos in the back proposed for Huntington Avenue across from Mission Park
Mission Hill sushi place ordered shut for variety of health violations