Police: Man gets annoyed when people keep stopping him from trying to break into cars in East Boston, pulls out gun, eventually shoots a car 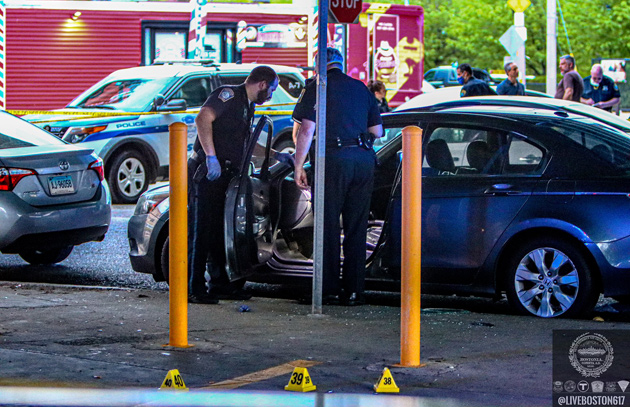 Update: The guy made national headlines in December.

Boston Police report arresting an East Boston man they say got so irritated at people who were trying to keep him from breaking into cars outside Santarpio's he eventually started waving a gun at them, before gaining entry to one car by shooting out its window.

Police report officers arriving at Chelsea and Porter streets around 7:20 p.m. found Stephen Woodard, 30, sitting in a car on Chelsea Street with a shattered driver's side window, blood on his hands. Police say Woodard "sat stoically, refusing to answer officers," his hands between his legs. But after officers got him out of the car, police say, they found a folding knife in his pocket and a gun under the seat.

According to police, Woodard was trying out the door handle of a car parked outside Santarpio's when its owner came out with food and told him that was his car. Woodward walked away, but:

Additional victims stated they had exited the same restaurant as the other victim and were walking to the parking lot when the suspect proceeded towards the two of them and pointed a firearm at them. The victims who were inside of their motor vehicle, fled the parking lot at a high rate of speed, hearing multiple gunshots ringing out from the area.

Another witness stated he had observed the suspect waving the firearm, before shooting at a motor vehicle and fleeing the area.

Woodard was charged with unlawful possession of a firearm, carrying a loaded firearm on a public way, possession of a firearm with an obliterated serial number, discharging a firearm within 500 feet of a dwelling, assault by means of a dangerous weapon and breaking and entering a motor vehicle, police say. He was also charged as an armed career criminal, which potentially means a longer sentence if he's convicted on the other charges.

Why Didn't The Cops Kill Him After They Got Him Out Of The Car?

He had a gun and was up to no good.

I forgot, this is Boston.

BPD - Not Perfect, but also, not the demons that a lot of getting out their anger temporary urban living suburban raised brats backing onto legitimate protests have been spouting on about in the past two weeks.

Former BPD commissioner Ed Davis wrote an op-ed for the globe where he called for Union reform. Many people have been calling for this so it's good to see that movement supported by someone who most think was a pretty good commissioner.

He wants bad cops removed but wasn't able to do so. In almost all the cases of police brutality and corruption, the officer had many infractions first. (The details of the infractions are often kept secret due to the same union contracts.)

Basically, it's the Unions that are the biggest problem and the defund crowd should focus on that first. If cities were able to get rid of bad cops, the entire force would be better.

BTW, Walsh is part of this. Remember how he won in part because the strong police union support. Early in his term he signed the police union contracts, often at odds with the city council. (Same for the fire department too.) Changing funding levels is meaningless if you don't change the way the officers are regulated.

We don't kill people via asphyxiation of the brain! Put up the Mission Accomplished banner, Marty!

The SYSTEM is racist.

Hooray, BPD Did The Bare Minimum!

Funny that "not killing people" is now seen as praiseworthy, rather than, you know, the default expectation. And apparently we shouldn't have any problem with that.

Just saying that they are doing the right thing and are not the demons that many people are making them out to be.

Are there a few bad actors? Sure. Does that delegitimize the entire department? No.

There were a few bad actors last Sunday night in town, does that delegitimize the entire protest? No.

It also is fun as hell triggering you.

And yet you are praising them

I mean, it's right there in your comment, three inches above this. Strange that you feel compelled to do this. Stranger yet that you would then deny it.

Anyway, I also went to my job every day last week and managed not to rough anybody up or shoot anyone. Do I get a commendation too?

How many people with guns did you disarm? Or how many times did your boss or customer ask you to go take care of someone who was threatening someone with a gun?

It really does make you think.

You can think BPD isn't horrible and still want them to change. The two aren't exclusive.

Just Googling this guy shows a long history of crime in the area stretching back ten years.

All this cop talk

What about the guy who was arrested? How stupid do you have to be to attract police attention while illegally in possession of a firearm right now?