Boston Police report they have opened a murder investigation into the death of Carlos DelRosario, who was shot at 55 Beech Glen St. on April 29, 2013. Read more.

On Martin Luther King Day, police called in to stop demolition of garages at historic house where civil-rights documentarian lived

Fort Hill residents called 911 today to summon police when they saw a contractor tearing down the garages at the home where filmmaker and activist Henry Hampton lived as he produced the award-winning documentary series, "Eyes on the Prize" and created one of the larges minority-owned production companies in the country. Read more.

A couple of minutes of orange 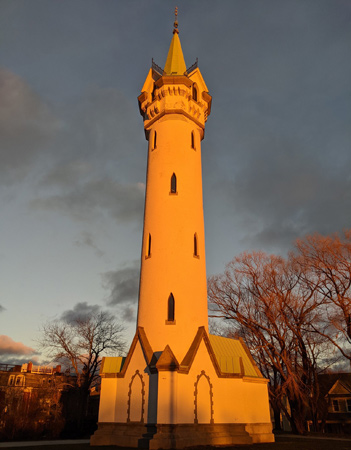 Thebostonlol captured the orange of the setting sun on the old Fort Hill water tower in Roxbury late this afternoon.

The sun also turned the more nondescript Jamaicaway apartment tower orange, as seen from down by the Jamaica Pond boathouse: Read more. 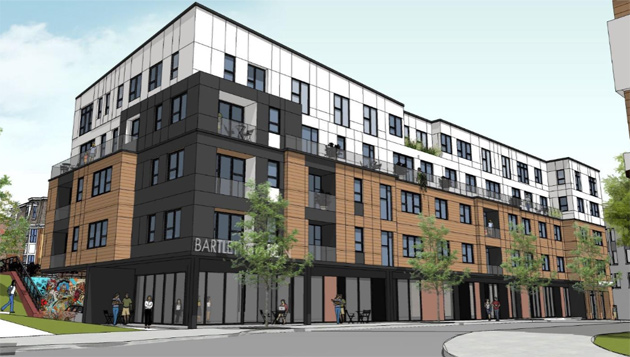 Here's a first: Woman says neighbor slapped a Denver boot on her car in parking-space dispute

WBZ reports a resident of Fort Hill in Roxbury became angry that his neighbor parked in "his" spot Friday - several days after the snowstorm - and so slapped a Denver boot on her car. He removed it only after she called 911 and police showed up. No word on where he got the device, which was red and yellow, unlike the yellow ones the city uses for unpaid parking tickets.

The Dig reports on the fight between the owner of a large old historic house on Lambert Street who reclaimed it from pimps and drug dealers and who now wants to sell it to a developer and the neighbors who are opposed.

Some towering jazz in Roxbury

Roxbury intersection as homage to Sartre

Gareth show us the intersection of Juniper, Thornton and Rockledge on Fort Hill.

Inside the Fort Hill standpipe

Fort Hill History gives us a peek inside the Roxbury landmark, now being readied for some renovations this spring and summer.

Fort Hill History examines what used to sit on what is now one of the hill's quieter areas.

Emmanuel College eyes Roxbury convent for use as a retreat

Both Ends of Dudley reports the college is thinking about making a bid for St. Margaret's Convent, which is looking to decamp to Duxbury.

A Centerville man who tried pulling one woman into his Jeep, then broke into another woman's apartment, led police on a short chase that ended with him hitting a cruiser then trying to run away and finally struggling with officers as he refused to let go of a knife, police say.

Christopher Baker, 43, was charged with attempted kidnapping, home invasion, armed breaking and entering of a dwelling house, assault by means of a dangerous weapon, assault and battery on a police officer, operating after license revocation and failing to stop for police officers following a two-hour hunt across Roxbury's Fort Hill neighborhood.

There's a reason they call it Fort Hill

Fort Hill History recounts Roxbury's role in helping to force the British out of Boston on Evacuation Day, way back when.

Rodney Singleton has started a blog about the history of the Roxbury hill.

Citizen complaint of the day: All God's creatures, alive and dead

A citizen looks up and reports a raccoon on a light pole on I Street in South Boston.

Another citizen looks down and reports a really dead opossum in the street on Highland Avenue in Roxbury, adds a note of urgency:

The sisters of St. Margaret Convent have sent a letter to neighbors that plans by the Bridge Boston Charter School to buy the convent have fallen through:

The process worked as it was intended with Bridge Boston doing their due diligence and determining that they could not make the site work for the special transportation needs of a school. They will be renting space in Jamaica Plain instead.

Some neighbors of Roxbury convent say turning it into school would bring too much noise, traffic, danger

Rodney Singleton posts some "guiding principles" from neighbors of St. Margarget's Convent, which the Sisters of St. Margaret are planning to sell to the Bridge Boston Charter School, which will ultimately serve up to 335 students.

The neighbors say they are worried about all the buses for what will be a citywide school in a neighborhood already full of schools and buses and even the safety of having a school on a rocky outcropping. They say they'd rather see a museum, a library or even condos on the land.

Jonas Prang reports on his efforts to get care for some feral cats on Fort Hill:

The shame of Alvah Kittredge Square

Jonas Prang agrees the Roxbury square is looking much better these days - except, he writes, for Alvah Kittredge's house: