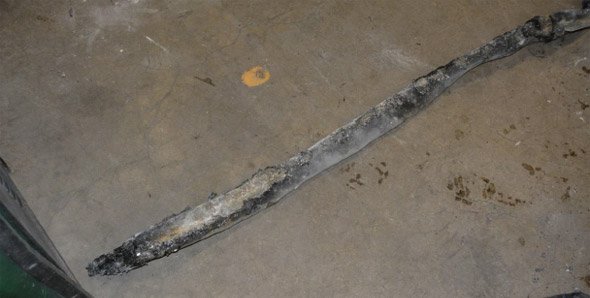 Where the hose burned through. From the BFD report.

Federal and local officials today released reports on the 2014 fire that killed two firefighters by trapping them in the basement with a hose that had been burned through, leaving them with no water.

Both the reports by the National Institute for Occupational Safety and Health and a Boston Fire Department board of inquiry provide timelines and other details of the events that effectively doomed Lt. Edward Walsh and Firefighter Michael Kennedy only minutes after they entered 298 Beacon St. from the front and went down stairs to the basement in search of the fire source - which turned out to be a shed in the rear of the building.

Both reports say sprinklers in the 19th-century building might have dampened the fire enough to prevent problems - and that the building's "balloon framing" construction and building modifications over the decades left the structure particularly vulnerable to the sort of rapid fire, buildup of flammable gases and explosions that trapped the two firefighters and seriously injured more than a dozen others. A window that gave way in the heat served as a sort of chimney that led to even more intensification of what became a nine-alarm fire, they say.

NIOSH concentrated on steps the fire department should take to prevent a recurrence, including bolstering response to fire scenes and "sizing up" of scenes before firefighters rush in - in this case, the report found the initial responders split up due to the presence of residents still in the building, leaving nobody to hook up one hose or check the rear of the building, where the fire had started. BFD should also conduct training in how to handle wind-whipped fires - gusts of up to 69 m.p.h. off the Charles made the fire particularly difficult to handle - the federal agency said.

The BFD board of inquiry also took aim on the cause of the fire to begin with: "Unpermitted and improperly performed welding" at a neighboring building that sparked a fire in a wooden shed attached to 298 Beacon that spread to the brownstone itself:

The Department should evaluate the current application and approval process for all hot work permits issued to contractors. A City of Boston Ordinance should be established that requires a certification for any person wishing to perform hot work within the City of Boston that provides stringent penalties for violators.

Last April, the Suffolk County District Attorney's office concluded criminal charges were not warranted because while the workers were careless, they weren't "reckless" - the Massachusetts standard by which criminal charges could result.

Funny how despite strong

Funny how despite strong unions and everything BASIC LIFE SAFETY ISSUES aren't at the forefront.

It's not like that isn't the primary JOB OF THE UNIONS or anything TO PROTECT WORKER SAFETY.

Just what the Hell has the union leadership been going all these years? These issues have been known for a long time now. Why aren't they a priority?

All the effort goes into arbitration, pushing for lucrative contracts, and fighting mandatory drug testing, meanwhile firefighters are dying of cancer and in fires from an unsafe workplace. WTF!

Unions did not start the fire

Unions did not start the fire. Welders started the fire. Get it right.

The firemen didn't have to

The firemen didn't have to die. If they had proper hoses in the first place this wouldn't have happened.

In this day and age in a city and state known for technological innovation there is no excuse to not have 21st century equipment beyond criminal levels of neglect and complacency.

As was the Mission Hill fire truck crash which, IMO, was the indirect result of having the BFD repair trucks in house vs. simply farming out that work to a business set up for efficient repair of large vehicles.

More than many areas of public safety, there are interesting arguments in favor of a privatization of fire departments. Unlike the police, they are much more a reactive organization akin to ambulance services and could be operated in a similar way. It'll never happen here of course, so the BFD will continue to be a great economic base for towns around Boston.

As was the Mission Hill fire truck crash which, IMO, was the indirect result of having the BFD repair trucks in house vs. simply farming out that work to a business set up for efficient repair of large vehicles.

This is a topic that comes up when working with municipalities for the modification or new construction of their DPW or Highway Facility. Different towns/cities repair in house or contract out depending upon how the budget is set up. At least one town I've worked with actually changed how they perform maintenance from contract out to in house because they were able to turn the vehicle around and get it back into service faster (and thus not be down in manpower). But sometimes the budget just isn't there for the larger maintenance bays that go into a DPW facility for in house work. It's a conversation that is never off the table.

I don't understand why Boston

I don't understand why Boston doesn't have a centralized repair facility which takes care of every city owned vehicle under one roof instead of every department having separate maintenance facilities or service contracts.

I thought it was run by

A few years ago, I lived in a rickety old tinderbox of a house that went up in flames in the early hours of the morning. Fortunately, my roommates and I were all able to get out safely, but it was the scariest thing I've ever lived through. I cannot imagine being a firefighter and charging into a burning house - and I really can't imagine the horror these poor guys must have felt when they realized they were trapped.

Wow. It is my biggest fear.

Wow. It is my biggest fear. I get out of bed at nights making sure candles are out, things are unplugged, etc.. Then again, fires aren't always the fault of human mistakes.

I'm sure it's something you'll never forget.

I just happened to be listening to the scanner that day. It was horrible. Firefighters are amazing heroes, and the OP is correct; they deserve the best equipment to keep them safe.

I too was listening while driving home. I felt numb listening to the Mayday calls and- the need water- it's getting real hot down here.
I was not aware that firehoses could be burned.
So much more appreciative of the work/risks firefighters do.
They all deserve more funding to keep them safe while responding to fires and other incidents.

I was surprised to see that FF Kennedy's mother blames her son's death on, in part, underfunding during "the previous administration." It's rare to hear ill spoken of Menino, and having the statement read during the official news conference gives it the BFD stamp of approval, which makes me wonder in turn if someone's trying to divert blame.

Not sure about diverting

Not sure about diverting blame. The BFD Union and previous administration had an acrimonious relationship. Much of those hard feelings still linger.

It wasn't without reason...

It wasn't without reason...

The fact of the matter is Mayor Menino hated firefighters and blamed them for spitting and yelling at his wife Angela. As a result of this feud EMS received millions in homeland security funds new equipment and training. The Fire Department and firefighters suffered greatly for this blood feud and brave men died. Shame on all those who play politics with public safety funding because eventually brave men and women will perish because of petty politics.

Ownership of numerous Back Bay, downtown luxury condos hinges on legal action involving Saudi companies, citizens and a murderous crown prince
John Singleton Copley's brief career as a political cartoonist
Pro tip: If you steal a bike, you might not want to keep riding it right around where you stole it
Shot in the arm for Hynes vaccination site: Thousands more daily doses
Giant inflatable rats are so passe
Berklee-area teriyaki place shutting down