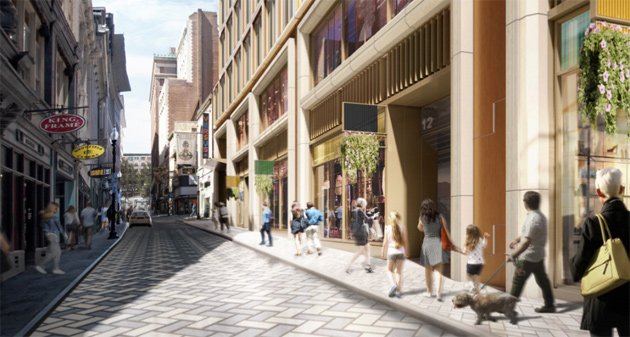 The New York company that owns the former Payless building at Bromfield and Washington streets in Downtown Crossing now says, in a filing with the BPDA last week, it expects to begin 28 months of construction on a new 22-story office tower there in the second half of 2022.

Midwood Investment and Development first bought part of the site in 1979. It proposed a 22-story replacement in 2008, then the economy collapsed and that was that until 2016, when it proposed a 59-story skyscraper with both apartments and condos, with a gaping maw of a garage entrance where stores used to be on the Bromfield side of the building. That didn't go over well, the company withdrew those plans and then came back in 2020 with its current plan, which would include three levels of retail space - one below ground - topped by regular, everyday office space, with no life-sciences space at all.

As part of the project, Midwood would pay $4.25 million in housing linkage funds, which will be used to ensure that all of the 126 units in a 19-story apartment building will be rented as affordable - with more than half the units rented to people making no more than 30% of the Boston area median income. That project is proposed by St. Francis House and the Planning Office of Urban Affairs.

Unlike the 59-story proposal, the current Midwood proposal calls for no parking on the site - which Midwood notes is in "a transit-rich, pedestrian-friendly location," with existing garages a short walk away.

Also unlike the previous proposal, the current one is aimed at preserving Bromfield Street's current layout of small, independently owned shops:

The ground floor retail storefronts have been designed to accommodate smaller retailers, this is particularly notable along Bromfield Street where this smaller storefront is characteristic of the historic streetscape environment. The Proponent will discuss the possibility of the existing retailers occupying space in the new building. The Proponent owns similar retail assets on Bromfield and Milk Streets and will explore the feasibility of providing interim space so that these legacy retailers will not need to relocate out of the neighborhood during the term of construction.

In the days of yore of the 60s, 70s and even 80s, Bromfield Street was a really cool, Greenwich Village-y street full of bookshops and all kinds of curio places, a coffeehouse or two, as well as the watch shops it was known for. And a few upstairs artist lofts that sometimes held rock & roll parties that you had to be in-the-know to know about. In the 70s it was where the pioneering Gay Community News(GCN) had it's offices. And don't forget Sherman's. Not much of interest left on Bromfield these days, and a big chunk of it is now a blank wall thanks to that Suffolk Building on Tremont. Oh, and the urine smell from the addicted and mentally ill that call DTX home. Might as well put up this building. The description, if it is to be believed, might improve current conditions.

I used to work on the third

I used to work on the third floor above the main entrance on Bromfield that was next to the watch shop. This was in the 90's, when it was largely transitioning out of its heyday, although there were still some interesting things around. Like a lot of those older downtown blocks, it's a hodgepodge of many smaller buildings stuck together over time, with makeshift floors often spanning several different buildings when walking from one room to another. Sad to see go, but even sadder to see so much of this block lay empty and depressing for so long, so at least something is finally happening now. That One Gig shop (which was previously in a basement) recently took-over the Payless Shoe location, but I guess they'll have to move again. I guess next on the list of "when will something finally happen at that location?" in that downtown area -- the abandoned Felt location.

From the headline I thought

From the headline I thought they were proposing to offset their affordable housing requirements by building an all affordable building on Lagrange in Westie. And was going to say, MAN wishful thinking there. But sure, this looks fine. Might as well. That payless building is a nightmare.

Payless building is a pretty

Payless building is a pretty decent pre-war, as is the jewelry building next to it. The other two buildings are pretty trash, though. Rather at least an attempt to preserve the two vs yet another mega block/corner building.

When everyone’s working from home? Also, the kind of person who would pay top dollar to live here would expect a parking space.

People don’t live in office buildings. And there are plenty of high rise buildings around the world that don’t have their own parking garage.

When everyone’s working from

When everyone’s working from home?

Not everyone is currently working from home. And while maybe not everyone else will return -- eventually the majority will, at least in hybrid form. Psychologically, not everyone can work in isolation for their entire working career (I'd imagine this is the majority of humanity), and Zoom meetings are no replacement for real human contact in the long term. Plus, it's just a 22-story proposal, so it's not a big risk/commitment like the 59-story proposal they originally did.

“would expect a parking space”

So they should just be granted one?

Not if they were a sensible person. Car ownership is down in Boston. Especially in densely populated areas like downtown. A car becomes a burden and unnecessary with all the other options.

For all "sensible" people. If one half of a married couple has a job in downtown Boston while the other has a job in Westford or Peabody or Westborough, one of them is going to need a car to commute.

Historically, the commuter rail schedules have been close to unusable for reverse commuters. Years ago, I had a job that was in the same town (on 495) as a commuter rail station; I was living in the South End. I took the train a couple of times when my car was in the shop. I couldn't even get to work before about 11 AM because the first train out that far didn't arrive until after 10 and the walk from the station to work was 45 minutes. My return choices were 7 PM and 10 PM; the latter was difficult due to no streetlights on the way to the station. The trip by train and subway, with the walk, took about 2.5 hours each way compared to a drive that was consistently 40 to 50 minutes.

Yes, if you (and your partner/spouse) have a job in the city and few social interactions outside the city and its inner suburbs, it is practical to not have a car. That does not describe everyone who lives in the city, even downtown.

That's fine. If you need a

That's fine. If you need a spot, go get yourself a spot. Why should the city care that a property is going up without parking?

It's ridiculous that a developer even simply mentioning a plan like this is great news, but that's where we are. Humongous mega-spaces that only investor-backed enterprises can afford have done as much damage to Boston's street-level commercial environment as any other factor. I assume developers prefer them because they're easier to build and finding one tenant is simpler than finding five or ten, and the city doesn't care as long as the taxes are paid, but it's certainly been a bummer for me as a resident.

I don't think they're looking for tenants who want "humongous mega-spaces" so much as they're looking for tenants who can commit to long leases and will keep paying rent until the end of the lease, even if they close the store. Sure, there will be large companies like Payless or Borders or Forever 21 that get out of leases via bankruptcy or liquidation, but landlords are still going to favor tenants with deep pockets.

In the urban core there really aren't a lot of large retail spaces that weren't developed with a specific retailer in mind. And downtown, the bigger concern for retail will be what percentage of the workforce actually returns to downtown offices on a regular basis.

As long as they make room for

As long as they make room for Kung Fu Video & DVD and the Bromfield Pen Shop I'll be satisfied.

Already moved up the street.

Latest Boston crime movie takes a few liberties with the local geography
Green Line trolley derails or not at Park Street, but the end result is the same: No service
One can only imagine what shape Morrissey Boulevard is in
Advertising company sues over South Station construction; says it shouldn't have to pay for ad space nobody can see due to skyscraper work
Water on Milk
Israeli food becoming easier to find in Boston