The Boston parking wars have begun 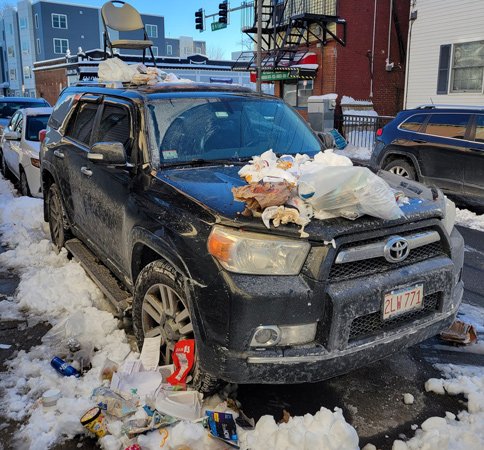 But this is the New Southie: Notice that the tires still appear to have air in them, and that all windows are all intact.

Jamaica Plain wants in on the game as well. In the Jamaica Plain Facebook group, a hospital worker who sometimes has to report to work in the middle of the night reports she piled snow from her car in front and in back - and came out later to discover somebody had gone to the work of piling most of the snow right at the driver's side door, where it froze, making it impossible for her to get in her car the normal way. But they did leave their shovel behind, at least.

Breaking: Just in, also from the JP Facebook page: Woman gets home from long shift where she was almost crushed by some equipment, she's tired, she's sore, she moves somebody's cones and parks - and then wakes up this morning to find all the air let out of her tires - and a giant dump of ice snow on her hood.

And in Mattapan, somebody filed a 311 complaint about a guy who shoveled his car onto a freshly cleared sidewalk, then went across the street and did the same for his girlfriend's:

When He Was Approached On Clearing His Mess He Got Rude & Belligerent And Stated It's Snow & If The Neighbors Got A Problem Come Deal With Him In A Loud & Threatening Manner.

Was gonna guess the handiwork

They followed the spirit, if

They followed the spirit, if not the letter, of the snow cone law. The city didn't declare a snow emergency simply because they didn't get a sufficiently advanced notice of this emergency.

Can you tell me exactly what law states that you cannot save a parking spot after shoveling your car out?

You don't want to have that argument

It's not exactly legal, but at the same time, claiming a part of a public way for oneself isn't legal either.

As it is, for the vast majority of Bostonians, the understanding is that if you can show the work and there's still a pantload of snow around, the cone is valid. That said, just because you shoveled out on January 7, 2022 doesn't mean you can claim that part of the parking lane as your own on July 7. There's going to be melting tomorrow. There's 48 hours for you.

... that keeps people from sticking a parking permit on a flatbed trailer and using it as an outdoor deck/grilling spot or raised bed garden.

Note, by the way, how hard it is to find Boston laws and regulations online? It's kind of hard to complain about people breaking the law when you make the law impossible to look up.

That's one way to trash a car. Interesting approach.

That spot is not even

That spot is not even shoveled.

Yeah that is what kills me about this phenom -- people often just break out enough snow to get out of their space, doing very little actual shoveling and then want to claim the spot.

It’s just a matter of time

It’s just a matter of time before someone gets killed because of this nonsense.

...although, this could be averted by arresting and punishing the perpetrators. Security camera? Find the perps, arrest them, make it very public, get people to understand that you can either pick up a shovel and clear another space or you can get busted. You don't get to pull this shit and go haw-haw with your fellow primitives.

nobody will clean up that trash either.

Usually, in Southie, the trash is sleeping inside the residences.

Begun the Parking Wars have

Begun the Parking Wars have

Welcome to the new human.

Welcome to the new human. Shaped and formed by Covid, Zoom, Video Chats, joblessness, homelessness, addiction, and depression. Lots of anger out there. We are humans in a landscape of predators and prey.

How you can tell this photo is from yesterday's storm The lower right of the original photo blown up: Note the Covid-19 home test-kit box.

Looks like there is mail and other printed matter in that trash. The person who dumped it could probably be identified by seeing whose mail that is.

No guarantee it's the perp's trash

They may have just torn open a nearby trash bag on the hood.

(...but it sure could be a good lead if there are envelopes!)

This never would have

This never would have happened in old Southie.

They must have been in a

They must have been in a hurry, they didn't slash the tires.

I don't understand why after

I don't understand why after decades of disorder you never hear a peep from the Mayor's Office or even anyone on the City Council try to tackle the space saver issue head on, draft rules with NFL-like detail, dream up some sort of online registration system, and try to enshrine it all in city ordinance.

The city council only took a couple of weeks to ban Haystack's app. And the council's action made the winter space saver situation even more inconsistent than it was before.

"You have to tackle him, but you cede a fifth of the distance between a touchback and the goal if you sneeze on the passer."

Space savers after a snow storm

The 3rd rail of Boston politics