Before the bars: The food-based history of 1270 Boylston 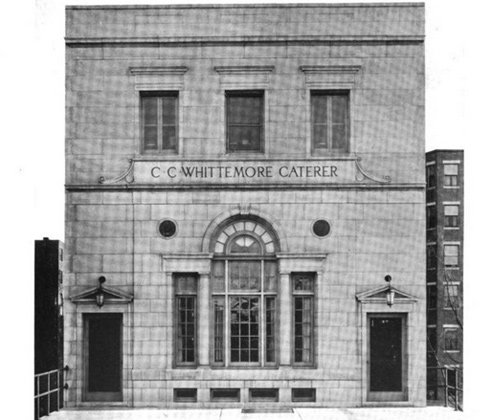 The catering business in 1921, from the Architectural Forum. Compare to a more recent view.

Photos of 1270 Boylston St. - and the neighboring and larger 1252-1268 Boylston St. - being torn down this week brought back memories of the clubs and bars that used the space over the last few decades.

But, of course, this is Boston and the history of the building goes back further.

What went up as 1270 Boylston St. started in the early part of the 20th century, when Carroll C. Whittemore began a catering service. Word of his excellent food quickly spread; a report on a dinner of 300 florists at Horticultural Hall in 1911 noted, "C. C. Whittemore catered in his usual efficient manner, the menu being the best he has ever served."

Whittemore opened a restaurant on Boylston Street in the Back Bay. In 1919, his catering concern booming, he had a new building constructed at 1270 Boylston St., to handle the cooking and other preparation for all the meals he was delivering. Some 1,000 people attended his grand opening on Dec. 3, 1919, the Globe reported.

In 1921, the Architectural Forum, a national magazine, took note of the new building:

This structure, of which Allen & Collens and J. Lawrence Berry are architects, was carefully planned for the exclusive use of a caterer and the results is a building which includes every convenience. Since show windows, in this instance, are neither necessary nor desirable, the facade has been given a treatment which does not suggest a shop. Cast stone is the material used with rondels of verde antique marble at the sides of the Palladian window which is the dominating architectural feature of the front.

Inside, the first floor was where orders would be assembled out of items cooked and baked on the second floor - with the basement set up to churn out ice cream and send orders out for delivery, the magazine continued.

Things went well with the catering business, aside from a worker being injured when a gas oven exploded in 1920 and a burglary in 1921, in which somebody broke into the building overnight and used just enough explosive to blow open the company safe without making much noise and make off with $250 in cash. "It was the best job I have ever seen done on a safe," a Boston officer told the Globe.

Ad from the 1922 Boston Directory:

His second wife, Mary Edna Whittemore, presented a will in probate court, signed in 1927, that left her the business on condition she keep certain workers on and that they share in the company's profits. But one of his sons from his first wife, Stanley - who was on one of the workers C.C. said had to be kept on - contested the will, saying one of the four pages had been inserted in the will after CC signed it and his signature on that page had been forged.

Part of his proof: The page in question only had holes from one staple, while the other three pages had holes from two staples. Stanley also called a handwriting expert, who declared the signature on that page had been written a year before the signatures on the others. Also called to the stand: The manager of the tea room on Massachusetts Avenue C.C. had also set up, who testified C.C. had told him for years he was afraid of Mary Edna - and had told him just three months before his death that he would provide for his son.

But Mary Edna called her own expert, who testified all four pages had been typed on the same typewriter and that the ink used for the signatures was the same.

Also, she called the people who had witnessed C.C. signing the will and all but one agreed he had, in fact, signed all four pages as they watched. The remaining witness only said she could not specifically remember him signing the page in question, but that after looking at his signature concluded it was, in fact his.

The next year, she was approached by a man named Eugene Howe, who said he was formerly a broker and had heard she needed someone to help her with her finances after her husband's death. She agreed to hire him and he started doing odd jobs for her at 1270 Boylston St. A few months later, she appointed him treasurer of the company.

But four months after that, an auditor going over the company's books noticed oddities, such as thousands of dollars of missing securities - even as Howe kept asking him why he was taking so long with his audit and demanding he speed it up. The auditor went to Mary Edna and she went to police. On March 27, 1934, Howe arrived at 1270 late that afternoon, only to have his secretary tell him the police and the auditor were waiting for him. The Globe reports he told her he did not have time to talk to them, put his coat and hat back on, picked up a briefcase and walked out - but officers waiting outside arrested him as he was getting into his car.

In October, 1934, the company, unable to pay its bills, was forced into involuntary bankruptcy - its largest creditor being the Boston Ice Company.

The building was eventually sold to Stephen C. Hung, who used the building much like the Whittemores - to make food for his Hung's Food Sales, Inc., according to a 1938 Building Department permit. He also opened a restaurant in the building.

In 1939, Hung filed with the US Patent Office to sell cans of Hung's Chic-Chow Dinner Chicken and Vegetables. The company also made and sold jars of "Sub Gum Deluxe Chow Mein" and cans of "Chinese Chop Suey," one of whose purchasers was Dutchland Farms, a Howard Johnson competitor that started in Brockton.

A 1946 Globe account reports the Green Pagoda restaurant was held up by two thieves who took all the receipts out the cash register, while about 20 patrons dined unaware.

ISD records show Hung continued to operate in the building through at least the mid 1950s. In 1964, the restaurant was closed and all its equipment sold at auction.

Last month, the Boston Landmarks Commission decided that neither 1270 Boylston nor the adjoining 1252-1268 were important enough to warrant saving rather than being replaced by an apartment building - especially since the building would include a black-box theater dedicated to LGBTQ peformances, in homage to the clubs and bars that had long occupied the two buildings.

Is that the fire station?

Is that the fire station?

The building was never used as a fire station.

Thank you for posting this article, that was very interesting. It's too bad the building couldn't be saved, so many memories.

Does anyone have details on the alleged theater?

Does it have a tenant, or any commitments from production companies like the Gold Dust Orphans who performed at the "Ramrod Center for the Performing Arts"?
Will it serve alcohol during performances as was the case at Ramrod/Machine?
If this theater does happen, it wont be long before the residents of the building start to complain about the noise. It all sounds like a feelgood promise that will never happen.

The Theater Offensive will run it

It was a happening...

It was still there in the early 80's

One of the few times I was ever in a gay bar, but I remember dancing until they turned the lights on.

Thanks for this! It appears it was quite a nice looking little building in its day. I guess not every building can remain and be restored, but it's still too bad. :(

How long is Boylston Street?

How long is Boylston Street? Does it go to Cambridge?

One of the most Boston things about Boston is it has the same street names in multiple neighborhoods.

Street name duplication is due to Boston annexing a few surrounding towns, which had their own street names already in place (like Boylston St. in JP). Boylston in Boston downtown goes from Chinatown/Washington st to Fenway/Beacon St.

Tacos until 4 a.m.? In the City that Always Sleeps? Of course not
Some BU students want return to remote learning as long as Covid-19 positivity rates are high
Mechanism aimed at keeping Muddy River floodwater out of a Green Line tunnel is disabling trolleys
The D Line's fate is sealed; problems at Beaconsfield
Rainbow over Boston
Construction workers puncture gas main at Landmark Center